DISCLAIMER: The below opinions are not facts but simply very one sided, biased views from an aged and cynical seen it all comics fan whose really trying to look on the bright side of things. That the opinions expressed below happen to be the truth is merely coincidental.

Apologies for no column last week but sometimes I gotta read myself a whole lotta comics and that takes time, okay? I mean, I don’t want to do it; I do it for you all because I love ya. Yep- I’m a comix martyr. So let’s cut the shit and get straight down to it. Last week saw two of my most anticipated comics of the summer SUPERMAN UNCHAINED and THE TRUE LIVES OF THE FABULOUS KILLJOYS. 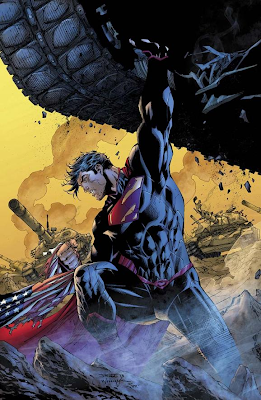 Blasting straight out of the gate with detailed and intricate artwork SUPERMAN UNCHAINED is the big bombastic superhero comic we need right now. In this first issue writer Scott Snyder creates a mystery to be solved as we are introduced to the first... well that would be telling and I ain’t telling. On the artwork alone, it is highly recommended (check out the huge fold out poster that is an actual page of the story) but with Snyder at the helm you know that, like on his Batman run, there will be twists and turns and he will be taking Superman into uncharted territory.

It’s full of action but still has time to build characters; Clark’s relationship with Lois Lane and Jimmy Olsen is reintroduced and clearly set out as is his new job as a blogger (he’s no longer at the Daily Planet-wooh, modern!) and we meet Lex Luthor in a superbly humorous scene that fits the character so well. All in all a fantastic place to jump into a new story about Superman especially if you enjoyed ‘Man of Steel’ and want to get reacquainted with the comic book version. 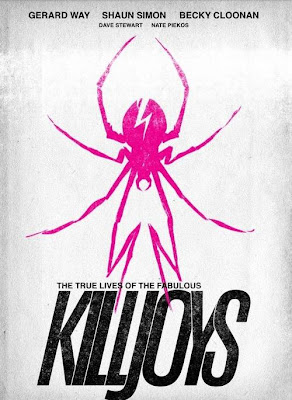 But the best comic of last week has to be one that originated not from comics or film but music. Based upon My Chemical Romance’s last album- Danger Days: the True Lives of the Fabulous Killjoys- (Lead singer) Gerard Way’s THE TRUE LIVES OF THE FABULOUS KILLJOYS is a slice of zesty sci fi futuro-punk and my life’s all the better for it. In the near future Battery City is run by a mega corporation-Better Living Industries- and proto superheroes hide out around the outskirts of the city. But who will save them? Will it be....? Well  to get a better idea of the back story and more on the main character, simply called GIRL,  get re-watching the videos  for MCR’s ‘Na Na Na’ and ‘Sing’ on YouTube as they act as prequels. However don’t worry if you can’t as the world Way and his co- conspirators (incl. co- writer Shaun Simon) build in the first issue sets the scene perfectly.

But if you do want it to be a multimedia experience listen to the album DANGER DAYS as a setup/chapter one/prequel to the comic as there is a strong story line running from album to comic. The call backs to the album’s concepts and characters does make the comic richer and more detailed but more surprisingly the album’s lyrical content is used word for word at times, giving it a an exciting familiarity- like you’re revisiting a mysterious place you’ve been before- and real crossover appeal between comic and music fans; the whole comic has a very sing songy quality to it, which gives it a poetic feel that is quite unique. Becky Cloonan’s art is clean and precise and pulls the story along nicely with Dan Jackson’s colours making every panel pop of the page. Definitely one of the more interesting comics to come along so far this year and at just six issues long it isn’t a huge investment.

In Scott Snyder’s other book BATMAN - with artist Greg Capullo - begins a twelve issue story arc entitled ‘Zero Year.’ Ostensibly a retelling of the origin of the Dark Knight, which has been done a 101 times before and in all media, however Snyder promises he will be throwing new light on Batman’s past and bringing brand new formative experiences, that helped shape Bruce Wayne, to the forefront. In the first issue some bits do feel familiar whilst other sections are a little fresher, however the art is spot on, the dialogue rings true and is that the hint of a certain bat- villain or not?

However it’s not all aliens from doomed planets and grim vigilantes there’s also the first issue of SIX GUN GORILLA. Yeah, you read that correctly, SIX GUN GORILLA, and its contents are exactly what it says on the front- so no false advertising there! Si Spurrier and Jeff Stokely’s SIX GUN GORILLA is a sci fi western chock full of crazy creatures and a beast with very big guns. It’s cartoony fun and like the Fabulous Killjoys comic they’ve created a fully formed world on the page you can dive straight into.

Now onto this week and what’s available and worthy of slapping cash down at your local comic shop and saying, nay, demanding ‘gimme my weekly dose!’

Becky Cloonan -artist for The Fabulous Killjoys, reviewed above- self publishes and releases her own DEMETER. Unofficially the third in a trilogy (that also includes ‘The Mire’ and ‘The Wolves’) DEMETER can still be read as a standalone story and is a beautiful piece of storytelling. Loosely based on the ancient Greek myth, Cloonan creates a comic with stark black and white art and a dense story with multiple meanings. If your local comic shop hasn’t got it, order from Becky’s website http://inkandthunder.blogspot.co.uk/- you won’t be disappointed.

The first issue of THUMBPRINT is out this week and an intriguing tale it looks. Based on a Joe Hill novella (author of Horns and Locke & Key) a soldier recently returned from her job as an Abu Ghraib prison worker starts to receive strange mail- is that a... thumbprint?  An intriguing first issue that brings with it many questions but with no answers which is exactly what you want from a mystery tale and certainly makes you want to pick up the next issue , so-job done.  BUT BUT BUT.......

BUT if you’re really tight for cash or haven’t got enough time for reading all of the above just buy the collected edition of SAGA by Brian K. Vaughn. Volume 2 is released this week so grab it (along with Volume 1) and eat up all its tasty comicy goodness. Seriously, it’s the best comic available today bar none. I wouldn’t lie to you now would I?

Oh and the matter about that little independent art house film that seems to be doing ok called ‘Man of Steel’- we’ll be getting into the nitty gritty of that next week as well as Batman/Superman #1 that looks well-ahem-amazing;  two words- Jae Lee. Google his name and look at his artwork and you’ll see what I mean. Until then: ciao and happy reading.