Summer may have chosen an awkward moment to show its face – the streets of Liverpool are bathed in golden evening sunlight, and the punters at Mello Mello seem more interested in soaking up the Vitamin D than going inside. Post Music present an interesting concept – a night of experimental music at one of the city's artistic hubs for and entry fee less than the price of a blackcurrant & soda at the bar (a princely 80p on the door) – but it seems they're struggling to compete with the sudden good weather. 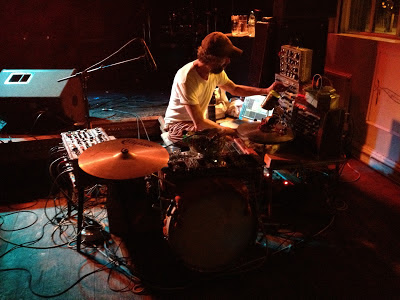 So it is that CLAIRE WELLES takes to the stage – or, more accurately, to the floor before it – as the last rays of light vanish behind the Hanover Street Novotel, in the presence of a room barely one-third full. It's an intimidating environment, and she seems to wobble through the first number. Performing entirely to backing tracks played off an old tape-deck, her remarkable voice takes a while to bed in; when she does, though, things really begin to take off.

Her music is truly oddball, off-the-wall in its sheer diversity; electro waltzes rub up against Phil-Collins-does-shoegaze numbers and 80s-style dancefloor fillers. The snippets of banter between songs reveal flashes of self-awareness, verging on self-consciousness – at one point she deprecatingly refers to the tape-deck as “the band”. Some of the appeal is lost on us, but despite the early paucity of the crowd she manages to draw people in; by the mid-point of the set it's pretty full, and with the room behind her Welles truly gives it her all on the closing numbers. It's a rousing end, but despite carrying the room she doesn't quite set it alight.

WHITE BLACULA, up next, have no such qualms – within moments of beginning their set with a wall of white noise, people are up and dancing. The six-piece – who supplement the guitar-bass-drums line-up with sax and clarinet – throw their disturbed psychedelic thrash grooves out into a ravenous crowd, playing (and occasionally looking) like musicians possessed. Their singer in particular fluctuates between stoic impassiveness and eye-swivelling insanity at the flick of a switch, calmly holding his microphone out to allow the saxophonist to be heard before walloping himself about the head with it. At one point between songs he even imitates an air-raid siren. The whole unhinged, unholy spectacle is summed up when an acquaintance of the Zine wheels out of the micro-moshpit that has developed down the front and, sweat dripping down their face, solemnly informs us that “it's all a bit weird, mate”.

By the time the headliner rolls up, well past 11pm, Mello is heaving. PADDY STEER has played Liverpool quite a lot this year – the last occasion just three weeks ago – and yet still manages to draw them in. It's reached the extent where he greets us as “my adopted second city”, his mirror-mosaic hat reflecting the stage-lights that are angled down at him, surrounded by a cornucopia of weird and wonderful instruments in the middle of the dancefloor.

Appropriately enough for a man who builds most of his instruments himself, there is an aura of the garden shed about his set-up. Dressed, despite the sweltering heat, in a biohazard suit over his street garb, Steer proceeds to lead us through a bewildering and exhilarating hour-long lesson in individuality. His lo-fi methods, and the ad hoc adjustments he makes every time something dissolves into feedback (which is often), never lessen the impact of his music, which is probably best described as the kind of thing people in the 1940s thought we'd be listening to today whilst bouncing round our lunar compounds and geodesic domes.

Part of the appeal lies in the knowledge that, regardless of how much the set has changed since last time, you never know quite what he's going to do next – will he put on the big green helmet (yes he does), will he play the lap steel (yes again), will his ancient laptop play up (oh hell yes)? And, on top of that, there's his gentle self-deprecation and radiant enthusiasm; there's no posturing, no attempt to be cool. The overall effect is of a favourite eccentric uncle doing a turn at a family gathering, and for some people it runs even deeper – leaving the gig after the conclusion of his set, one punter is heard to remark “If I could pick a dad, it'd be him”.