When an E.P gets straight into the act of hotting up your ears in the best possible way you know something good is happening. We speak not of being attacked by a portable device but of listening to the warm and direct melodies of Freedom Fry’s latest E.P. Friends and Enemies E.P. 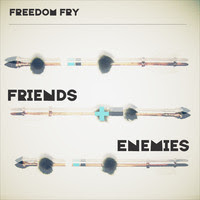 Opener and title track Friends and Enemies knows how to grab your attention with a lush intro beat intriguing you right until the twin-vox come in and then charms you into submission with an addictive chorus that keeps the catchy in the successful song equation firmly to the fore. As the fuzzily warm bass and guitar lines tweak the song into its natural end the darker atmos of The Sea Invisible comes along to impress you even more. The key to this songs excellence is the bouncy yet dramatic chorus, the two vocals combining to produce something you just can’t ignore.

It’s the formula that makes the whole E.P an experience that begs to be repeated over and over again. The baroque melodies are the bed rock to those irresistible vocals and this comes to a sweet point of fact on closer With The New Crowd. It’s the kind of song you’d want on your device as you walk down the über cool streets of Paris, with a European sensibility that casts a very special magic over the listener.

If we had to say anything about the Friends and Enemies E.P. we’d have to say that it does just what good music should do. And many listens later we’re still hooked!