We’d heard stories and we’d seen images. But until we heard the music we weren’t convinced. Call us skeptical or call us stubborn – but Kanye West was not for turning our ear until roughly fifty-eight minutes ago. Why fifty-eight? No reason – but one thing we do know is that Yeezus surprised us in it’s greatness. 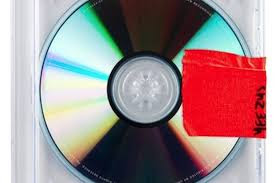 The quotes are legendary and the ego even more but fuck – this record hit us over the head in the best way. Ego rap is nothing new but the sheer rough edged insanity of Yeezus is what makes it truly worth the journey of listening to it. Our first thought was that Mr West has been listening to Death Grips – as the beats and sheer aggression of the record are the essence of a record by the latter. The ego though is what distinguishes this from them. I Am A God is a prime example – it could have gone hideously wrong but it doesn’t and there’s classic quotes as well.

“In a French-ass restaurant – Hurry up with my damn croissants!” is just one of many and it’s funny rather than anything else. Don’t be surprised if we use a version of that sometime soon on our travels – but the music beckons us once more and it’s potent at the very least and challenging at the most. But the key is the brevity and it works like treat.

Bring in the über-minimal production, fuzzy beats behind the instant recognisable voice of Yeezy and it’s something to treasure. Just like the hoods that many of the artist’s songs evoke – the key here is dark and effective rough edged cool. There’s a tangible drama to the often story like content of the song and it often transcends the traditional ego of the average Kanye record in a very refreshing way. Hold My Liquor is a prime example of this as well as many more of the albums excellently thought provoking moments.

But when it comes down to choosing highlights it’s tough – I Am A God is addictive, as is New Slaves and single Black Skinhead. The whole album is potentially a highlight if we let it be – but we know what Kanye would say about it. – “Hurry up with my damn massage!” And in words perhaps we’ve granted it. But not undeservedly – this is a riveting start to finish listen that literally screams for your attention.

Priase Yeezus – he has risen!