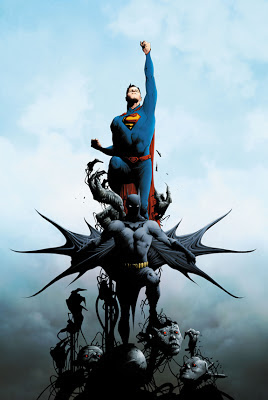 Well, well, well and I was so looking forward to it and, boy, I was disappointed. No not ‘Man of Steel’-that kicked ass but more about that later- but this week’s big debut issue from DC: BATMAN/ SUPERMAN. Where do I start? The art’s amazing, Jae Lee knocks it out of the park (a baseball analogy probably isn’t the best way to start a column for us Brits but its done now, so let’s move on), it’s beautifully stylised and design wise the panels are placed for best story telling potential.

The look of Batman and Superman is almost manga-esque and this gives the whole comic a different feel to anything else from the big  two (D.C. and Marvel), and that first page -WOW- you just want to frame it and put it on the wall. But where the comic is let down is with the story (SARCASM MODE-which I feel is an important part of the whole package).

It’s not that the writing is bad per se it’s just that it feels like it’s been done before as we are (re)introduced to the two main protagonists (yes they actually introduce us to Superman and Batman, two of the most recognisable fictional characters of all time!) and we are shown parts of their origins on a splash page; although to be fair Superman’s has changed a little since the DC Universe was rebooted two years ago and the scene is included to show what the characters have in common.

The scene where Bruce and Clark meet is well executed and the dialogue is spot on but it doesn’t stop the feeling we’ve been here before. AND to make matters worse there’s an unscheduled change where the last eleven pages of the comic are drawn by Ben Oliver, who can handle himself artistically but just isn’t Jae Lee; this jolted me right out of the story- what little there is- and spoilt the overall experience. However having said all that if Jae Lee remains on the title as the only artist and the story moves into more interesting territory I will probably be picking up the second issue wholly based on the art, and my love for the two characters, as this is a reinterpretation of them meeting for the first time and I want to see how it is ultimately handled. 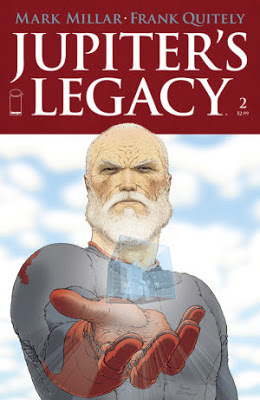 Another comic out this week that solely works on the strength of its art is JUPITER’S LEGACY. A New take on superhero kids living in the shadow of superhero parents, written by the popular Mark Millar creator of Kick Ass (you may recall the film adaptation in 2010). For my money Millar runs hot and cold and with his purposefully controversial style of writing he really is Marmite.

However I fully enjoyed his work on The Ultimates (which is pretty much the update of the Avengers that the movie was based on) and Old Man Logan-a future set tale of Wolverine as a kind of man with no name wanderer in a landscape where most of the Marvel superheroes have been killed-but his ultra-violent Kick Ass 2 and Nemesis series were, for my money, overkill (literally) and all style and no content. But with Jupiter’s Legacy he has teamed with Frank Quitely whose art is so unique and like no other artist working in comics, the series suddenly becomes a must buy.

Quitely’s art harks back to a more adventurous underground comix style which is actually his artistic background- and has been described by some as beautifully ugly; when you see his work this makes perfect sense. The story itself is not wholly original (see: Watchmen, Squadron Supreme, Rising Stars where superheroes are shoe horned into the ‘real world’ to see how they cope, interact, react etc.) but with Quitely on art at least it’s going to be an attractive, if bumpy (both Quitely and Millar are notorious for not being able to stick to a schedule) ride. 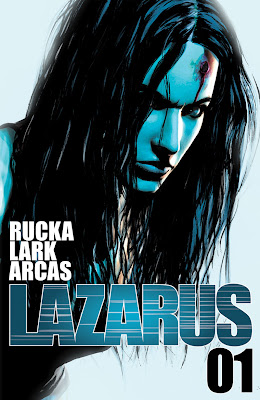 Greg Rucka’s LAZARUS continues Image Comics’ amazing run of high quality titles: incl. The Manhattan Projects, Saga, Fatale, East of West and Change i.e. some of the best comics of the year. Lazarus tells the tale of Forever Carlyle as she is reborn, returning from the dead, to protect her family’s estate in a dystopian future where society is nothing but a financial battleground: a world where you must prove you are useful or you become 'waste'. Greg Rucka is such a strong writer he manages to set up a powerful and intriguing story in one issue without any rush, and Michael Lark is the perfect artist to make all you read seem almost believable.

UNCANNY, like Lazarus, is another first issue that start a new world from scratch; unlike Lazarus it’s a little more slow paced and stumbles where Lazarus is well paced. However the concept is intriguing- the main protagonist can absorb the thoughts, skills and talents of others (if a little unoriginal as that is basically what Mystique from X- Men does). What is unique is how he uses his ability to be a con artist, specifically gambling, and this gives the comic that much needed twist. The writer- Andy Diggle- is backed by the impressive art of Aaron Campbell who has an almost painted style and there’s enough set up in this issue to make you want to buy the next.

And if kids want to get in on the action give them SUPERMAN FAMILY ADVENTURES VOL. 1 as its FUN FUN FUN and will make them a Superman fan for life and love you forever. And who doesn’t want that? 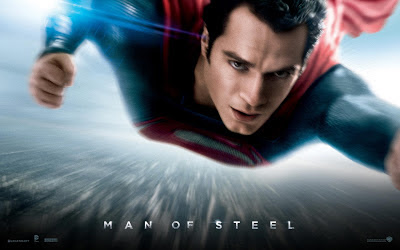 Man of Steel came out a few weeks ago to big box office but it really spilt critic and comics fans alike. If you’ve seen it you’ll know why; there’s a certain scene near the end that caused the most controversy and got tongues wagging. The movie presents a more doubt filled, insecure Superman who’s really trying to find where he fits in the world. He’s not super confident (pun intended) and over the film he finds what it means to be a hero and, almost as importantly, to be human with the aid of his earth parents- Martha and Jonathan- and Jor-El, his Kryptonian father. Thematically ideas of destiny, legacy, family and trust push the story along.

But what really made the film for me was that the usual story beats of the Superman legend were changed, tweaked and modernised so even the most rabid Superman fans don’t know what’s coming next, and that’s exciting because, as I’ve repeatedly mentioned in this column, I want to see new and fresh perspectives on old classics.

Like Nolan’s Dark Knight Trilogy, JJ Abrams’ Star Trek or Moffat’s Sherlock (and Guy Ritchie’s and the American ‘Elementary’ with Jonny Lee Miller as well) this is a reboot or restart of a well known character but unlike those adaptations, Superman fans seem to have been more vocal about changes and I’m wondering if it’s a combination of a nostalgic fondness for Christopher Reeve, as well as Superman being a character people like to ‘know where they are with’ as there’s something comfortable and reassuring about the character. But for me Man of Steel worked superbly on so many levels really getting under the skin of a super powered character and how it’s a curse as well as gift.

Finally he has a villain worthy of him (Michael Shannon- one of the most intense actors of our generation as Zod) and the more ‘silly’ aspects: the glasses hiding his identity, Lois working with him every day but not knowing who he is, where he gets his costume from, those red undies, are all dealt with in story, and in a mature and 21st century way. The movie is filled with Jesus allusions - he is ‘Christ in a cape’ more than ever before - and there’s a post 911 feel to the finale; again something critics didn’t like and even though it’s debatable whether it should be dealt with in a superhero movie I believe all kinds of fiction - and any good art and literature -  should mirror back to us, in some way, our fears, dreams and beliefs so we can scrutinise them and, maybe, understand them a little better. But as with anything it’s down to the individual, so go see Man of Steel and decide for yourself.

Anyway that’s me done for another week, so all I have to say is: ciao and happy reading.