Album Flashback #7: Moby – ‘Everything Is Wrong’

There’s a saying that the British, due to a cultural kink, tend to understate things out of politeness. But being raised not too far from New York Moby was never going to have that problem. 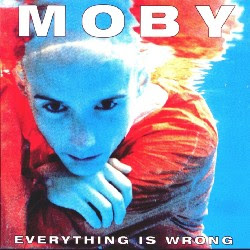 Indeed with the sense of humour Moby has, if the many sketches and outtakes found on his dvd extras are to be believed, he’d fit in well in our neck of the woods. Not least because Everything is Wrong is an album that almost two decades after being released still feels as fresh as the day it was born.

Opener Hymn, a different version than the (in our opinion) much more powerful single version, sets the scene well – ethereal key strokes setting the scene before we jump into the alt-four on the floor excellence of Feeling So Real. With a repeated verse that says just what it needs to say it’s left to the deftly arranged beats to do the work of supplanting it from the crisp vinyl to your cerebral cortex. Something it does very well!

As with much of Moby’s work it’s not just an excuse to throw out some funky beats for the people to throw shapes to, (Although there is nothing wrong with that at all obviously…) it’s got an emotional backbone that creates the subtext to the obvious dance driven heart of the music. There’s the odd curveball such as the thrash-dub brilliance of All That I Need is to Be Loved, working on the level of a general primal scream session cry for help as well as a generous genre jump to shake you up and the record as a whole is certainly not pigeonholing itself into one corner of the dance scene of the time - or indeed any scene.

The ambient moments mix with the heavy beats and the smatterings of thrash thrown in for good measure all add up to a record that doubtless confounded many at the time of release but still stands out as a highlight among highlights in Moby’s catalogue. The dance scene was once famously picky as to what it let itself be connected to but the diversity of styles Moby can work with make that not so much of a problem as he proved later in his career with the huge success of Play.

There may not be another record like it in his vast catalogue but for sure it’s a thrilling collection of euphoria, primal scream therapy and joyous beats that take the listener on a journey that stimulates not only the muscles but the mind. Even the sleeve notes are an essay that may very well be marmite in literary term but the one thing we need to know is that Everything is Wrong…

And we wouldn’t have it any other way!