At some point in our early teens, my social circle suddenly noticed that our friend Michael Foy was one of a surprisingly large number of Foys populating the world. Original Foy (as he was almost immediately and inevitably branded) would eventually be joined by such fan favourites as Bus-Stop Foy, Latchford Foy, Rugby Foy and the short-lived Onion Foy; each a fleeting reflection of the man whose name they unknowingly shared. 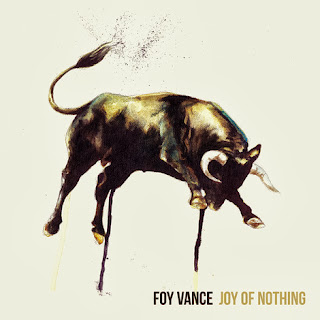 I haven't quite made my mind up where Foy Vance would fit into my friends' League of Foys. The Northern Irish musician's piano-driven second LP, Joy Of Nothing, comes as its creator enjoys an upsurge in popularity, having supported Ed Sheeran on the latter's British and North American tours. Sheeran himself makes an appearance, duetting with Vance on the song 'Guiding Light'. There are definitely similarities between the two; certainly, both artists share the habit of presenting lyrical inanities as profound statements, such as the title track's awkward climax “The joy of nothing/Is the sweetest something”.

Vance isn't just another Sheeran clone, though; his soulful adult pop is far more consistent and accomplished than his touring companion's youthfully gauche mix of folk and hip-hop. The stirring strings on opener 'Closed Hand, Full Of Friends' – courtesy of the Arco String Quartet – make for a phenomenal statement of intent; regrettably, it's also the record's high point.

It's hard to pinpoint exactly what the problem is – whether it lies in the songwriting, the performance, the production, whatever – but there is a big gaping hole where this record's heart should be. Joy Of Nothing is full of tales of love and heartbreak and adventure, and yet it sounds like the fundamental basis of its existence – the singular event from which stemmed everything that culminated in its creation – was somebody sitting down and going “hmm, I wonder how I go about writing a record about love and heartbreak and adventure?”

What we have here is stadium-pop – that despondent, bastardised genre of music currently exemplified by Mumford & Sons. Artists pump out safe music with no hint of even personal challenge, created for the sole purpose of cramming people into arenas for three hours at extortionate prices. These artists don't even sound like they're enjoying themselves, let alone passionate about what they do; the endeavour of making music is reduced to 'just a job', not all that far removed from managing the accounts at the regional branch of a cardboard distribution firm.

The two 'duets' (in reality both are glorified backing vocals, almost certainly label-mandated in a cynical attempt to increase interest) are by far the worst parts of this album. Coming long after it has degenerated into by-the-numbers ennui, both are utterly pointless. 'Guiding Light', the aforementioned Ed Sheeran duet that closes the record, is a joke; Sheeran is utterly anonymous. As for 'You And I', featuring Bonnie Raitt – forgive the unprofessional use of the personal anecdote, but I've listened to this record more times than I care to mention, and every time my reaction is still “Wait, Bonnie Raitt's on this?! What did she do to deserve such cruelty?” The peerless work of the Arco String Quartet, whose playing does immeasurable good for this record, will doubtless be ignored.

On second thought, I'm not going to bother giving Mr Vance his own moniker. Dammit, Foys are supposed to be better than this.

'Joy Of Nothing' is released on 26th August on Glassnote Records
www.foyvance.com
glassnotemusic.com