There is one big thing that I must commend Shudder Pulps on, before I say any more, and this is making the choice to release a pressing of their ‘Housebound’ EP on vinyl. Vinyl, and as form, has been making a big comeback recently, and for good reason. If you haven’t picked up yourself a nice player, and started purchasing music from physical shops as opposed to digital ones (‘Record Stores’ I believe they were once called), it’s well worth a go – you will love the improvement in sound quality and fantastic finds. Nice start Shudder Pulps. 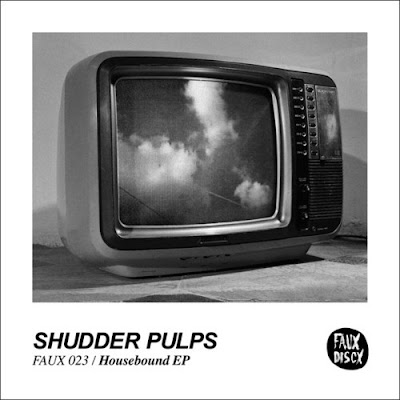 That said, the fact that you can buy the E.P. on vinyl is at the top of a decidedly short list of reasons as to why I would buy it I’m afraid. Hailing themselves as “3 punk lifers who use a guitar, a bass and drums to make music” it is unfortunately obvious to see why they left vocals or singing out of that list.

Punk vocals have always been an interesting point of debate - John Lydon famously getting the gig with the sex pistols by claiming he couldn’t sing at all, while Debbie Harry went on from Blondie to sing with a Jazz band. The point being, that there seems to be 2 ways to sing with a punk band – with no tune but pure malice and aggression or with actual thought put towards harmony and tune for a ‘smoother’ type sound. The vocals on Shudder Pulps opening track “The Tenth” seem to find a strange place somewhere in between - this can only really be described as ‘Monotone like’ and a bit dreary.

If I had one main piece of advice for this band, it would be to pick one way or another (Blondie pun unintentional). That said, the track does have some redeeming points; an interesting bass line with cool distorted sound being one of them. Second track ‘Kicker’ seems to at first to merit similar feedback – an interesting bass line hampered by a rather dull vocal part. However this track also features some rather strange harmonic choices from the lead guitar part (ridiculously loud in the mix, it should also be said) that lead you to wonder whether they are intentional or not. All of the issues mentioned previously seem to be magnified intensely for final track ‘Kings’ with the addition of some rather strange drum fills.

There are moments of this EP that do show glimmers of promise, but they take an awful lot of looking for. Far too much for me to part with money for a copy, vinyl or not. I hope, for their sake, that this is music that fits a live setting a lot better than it does recorded.