Tonight’s support band, the 6-strong Kult Country is adept at whipping up Arcade Fire-isms to peaks of rhythmic intensity, with a female violinist moonlighting as a percussionist on a couple of songs. The final number, complete with crunchy, barking vocal effects shows a commendably experimental streak. But that’s not why we’re all here. Oh no… 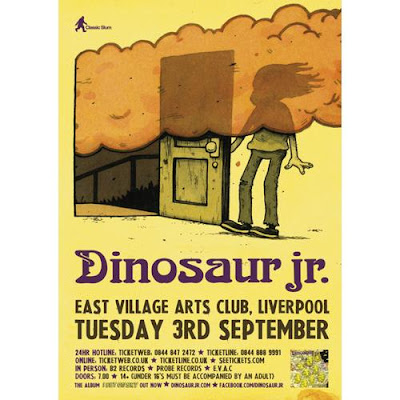 Onstage is a veritable city of Marshall amp stacks with a gap in the middle for a drum kit. Just looking at this arsenal of amplification is enough to give you an ear haemorrhage. The band about to plug into it have carved a particularly distinctive furrow into rock history, for while inspiring many a teenage dirtbag to pick up a guitar, they have never come close to deploying noise-by-numbers. J Mascis, the perennial mixed-up kid, is as close to the winsome world of indiepop and psychedelia as the badlands of punk and metal. Taking the stage to a welcoming roar they launch into “In a Jar”, and there it is, like a slab of burning granite – the fully cranked Mascis guitar.

With barely a break between numbers, they alternate singalong buzzbombs such as “The Wagon” with mid-tempo rockers; “Out There” showing off Mascis’s chordal sophistication. The one fatal flaw is the sound. Mascis’s just-got-up vocals – such a distinctive part of the Dinosaur Jnr spell – are all but lost in the mix. Standing enigmatically silent between songs, the now white-haired Mascis leaves all the audience interaction to bassist Lou Barlow, who delivers a chummy banter from beneath a curly mop of which ELO’s Jeff Lynne would be highly jealous.

Things reach a peak during a thrilling jam on “Forget The Swan”, an 8-minute rush of stoner punk adrenaline, Mascis’s epic guitar solos powered by solid rocket boosters that never burn out. Towards the end of the set they do a song by Deep Wound – the band Mascis and Barlow formed in high school. It’s a boisterous enough punk number, but following it, “Freak Scene” provokes the first moshing of the night. Ending on The Cure’s “Just Like Heaven”, Dinosaur Jnr have done just enough to prove to all present that, white hair or not, they still have a winning way with a decibel.