The circle of malevolent looking figures that feature on the cover art of Innocents doesn’t reveal much about the contents of the album it graces but it does make you look. Moby is a prolific artist and once confessed he has over 2000 songs left unreleased – and when you consider that his music is rarely less than essential to the soul that’s some statement. 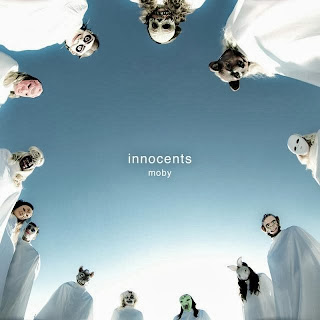 Innocents is a return to the collaborative format that made him a bigger name way back in the 2000’s and although the rootsy sounds many still associate him with are wholly absent, the music retains an aura of delicate class that not even one mention of ‘tv commercial licencing’ will shatter. After all, this is music for life and increasingly we’re surrounded by advertising that is undeniably made more tolerable by the music it utilises.

The raison d’etre for this outing is simple – low key synths, sweeping arps and those well cast guest vox that bring a new angle to the trademark Moby sound. Almost Home, featuring the honeyed vox of Damien Jurado is very pleasant listen – evoking the tail end of a long and tiring journey from the proverbial A to B as is the soul imbued Perfect Life, with its gospel choir bringing a cheerful sway to the usually darker subject matters of a Moby record.

A more upbeat tone takes root on the keystep imbued Don’t Love Me featuring Inyang Bassey – and it’s almost like a moment from previous album 18, which is only a good thing, of course. The vox add a retro-futuristic feel to the song and it is definitely a highlight from the album. The futuristic tone continues on the brooding A Long Time – and when the bass drums kick in the mix of the slightly distorted vox and the electric suite behind it certainly deliver the goods.

In fact the latter half of the album presents us with some of Moby’s most straight forwardly beautiful pieces for a few albums at least. Saints begins a killer closing arc that takes us from overarching futuristic soundscapes to the Mark Lanegan featuring The Lonely Night to the closing serenade of The Dogs.

If you like Moby you’ll want to get hold of this immediately but any newcomers to the man with a thousand talents will be equally comfortable as well – the music is considered yet classy and mournful yet never less than graceful. In short Innocents is a return to form (if indeed he ever lost said ‘form’) for an artist that continues to produce the soul touching sonic goods.