The underground spirit of releasing an E.P. with that just audible buzz about it is one that is hard to pinpoint in any physical manner but a listen to FEATURE’s recently released Memory E.P. is enough to make you realise that it’s there… 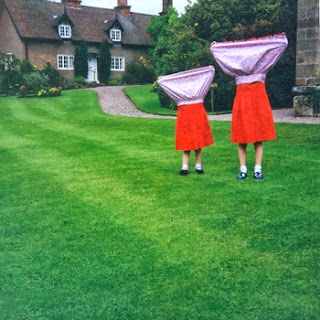 With a front cover that recalls a more innocent time when the big amps and dirty guitar vibes found on the E.P. were just gathering their things up before venturing into the world it’s appropriate its first release was on what is becoming one of our favorite formats – the cassette.

The music is at its core inspired by drone pop but there is a noticeably intellectual element to the songs that brings a new dimension to the genre here. With one of Sauna Youth’s gang in the duo that’s no surprise – and the experimental edge makes it all the more palatable. Opener Pre Feel sets the scene with fuzzy drone riffs and drums that are robotic if a robot could do it so artfully – and with the vocals set just back far enough into the mix to make them out it’s a good opening statement.

The chunkier Memory kicks the EP into higher gear with almost tribal chants for the vocals and a killer repetitive riff that gets right into your brain - Perhaps an apt title then? But as the tracks continue we get that comfortable feeling of joy that comes from hearing a record that really matters.

Fresh Pillow has a kraut flavoured melodic urgency with the candy like vocals of a folktronica band – one genre it would be hard to slot FEATURE into comfortably. But as much as we talk about genres the fact is that the Memory E.P. is a nice, low key but high punching surprise of a record. The initial cassette release may have fooled the casual listener but there is a definite case for enjoying this unique E.P. many times over.

Memory is out now.