Are ghosts real? Mazes don’t provide the answer to such scientific questions here but they do provide an album’s worth of off cuts and studio noodling that is a very persuading listen... 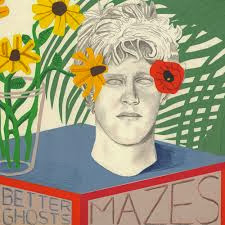 The intro, unusually titled Intro, is a feedback loop that leads into the first track the very listenable Hayfever Wristband. It’s a strong first track proper with the fast paced bass catching the ear with a pleasing ease but after a slightly unconventional beginning the album heads into gear with the fascinating Cicada.

Those in the know will be aware that a cicada is an insect notable for its noisy presence rather than its looks and the found sound recordings of these fascinating creatures features here – along with a mention of cooking insects on Hampstead Heath. Healthy, nutritious and a good listen as well!

Things get ever more pleasingly experimental and lo-fi as the album continues and if we’re honest, we enjoyed this more than their earlier release this year. The seeds of ideas are being sewn but not quite flowered and the music is varied and experimental, with plenty of found sound samples and crunchy guitar to keep you interested. There are many highlights, and it’s not an album you could imagine going back to everyday there is a definite value in re-listening here.

As with many albums like this the theme is a lack of theme and that is perfect – but it does take it away from those twilight moments you can soundtrack and into a more difficult mold – one that is much more than its parts. Our favorite is Sandgrown and as the longest track it gets the biggest chance to leave its mark with the lo-fi production giving it a dream like appeal.

It’s best to view this album as a particularly fascinating sonic sketch book that takes small moments of experimentation and places together in such a way as to benefit them all well. Perhaps the best way to enjoy this album is without expectation – those with a thirst for discovery will enjoy this rather excellent album all too easily.