Omar Souleyman is a truly talented musician and on Bahdeni Nami, his latest album,  we see no reason to not continue listening to this beautifully  energetic music. 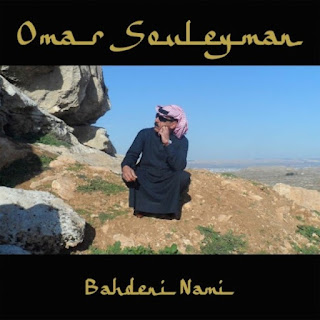 The joy of this album is easy to locate if you’ve ever caught Souleyman in the live setting and it’s all down to the catchiness of the debke rhythms that keep the listener entranced throughout. This album features collaborations with Four Tet, (aka Keiran Hebden, producer of previous album Wenu Wenu), Gilles Peterson, Modeselektor and a remix from Legowelt and as a whole feels truly joyful despite the darker themes of the lyrics.

But just because there’s darker themes, courtesy of oft-collaborator, poet Ahmad Alsamer, doesn’t mean the energy levels of his famously danceable music are down in any way. The music bounces about in the same unpredictable manner as previous releases and the influence of collaborators on the record is clearly felt in the excellent production. Mostly, the collaborations have resulted in songs true to the dabke sound that are truly marvellous to listen to. But there is only one minor misstep here and that is the final track, a remix of the title track from Legowelt that is good but would be better placed on a single as it stands better alone.

Elsewhere, the storming intro to Tawwalt El Gheba is another reason to love this album. It’s hard to find music this catchy and rewarding a listen but as has probably been said before, once you’ve heard Omar Souleyman you never forget that rich, joyful sound. Of course, making life a very long dance party is all in a day’s work for Omar Souleyman and for that we’re glad. The lyrical themes of love of loss may echo in every culture from the dawn of time but rarely are they expressed so joyfully as here. We challenge you not to listen to this album as a whole in rotation after hearing it for the first time!

The majority of songs here are almost-nine minute debke anthems that all vie for your ear with ever increasing intensity. It’s rather easy to suggest that unless you’re not warm blooded and human you’ll almost certainly dig this made for the dance floor world music that doesn’t want to be contained! Forget the bigoted comments on YouTube concerning the Syrian origin of these melodies, (and they are there) and discover your new favourite artist. You won’t regret it.