I find it unfair to name-check influences on a band when I come to write a review. It’s almost as if we’re praising their influences instead of the band themselves, and everything is so well integrated throughout Corsicana Lemonade that it very rarely sounds derivative at all. So I’ll start with a warning, and the warning is this – if you are unfamiliar with White Denim, be sure to drink plenty of energy drinks and get some pro plus down you before listening. 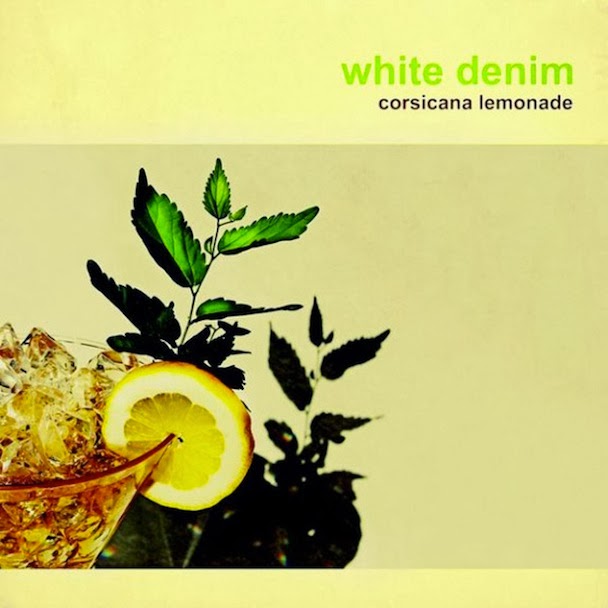 And that’s just to make sure you don’t fall behind too much! It’s fast paced. Really, really fast paced. Maybe not in the sense of BPM, it’s more to do with the urgent and hectic arrangements of the songs. Everything is jostling for space. It will certainly make you feel like you’ve ran the length of the M6 and back.

In some songs, like the title song for example, it feels very hyperactive. There a little tiny snippets of different sounds and instruments that leave the song as quickly as they enter, it’s very disorientating. And I mean that as a compliment, it isn’t often that someone is so affected by music that they feel physically disorientated.

My favourite song from the album is ‘Limited By Stature’. It can’t be anything other than a standout song, what with that cheeky little Rhubarb and Custardesque guitar opening and the incessant, sudden alarming changes between heavy hitting psych and dream –like fancy. It’s a darkly sarcastic nursery rhyme, no wait, it’s a hippy love-in, no wait, it’s a gently aggressive (what?!) rock n roll throwback, no wait... I can’t put my finger on it. I don’t need to. It’s a very entertaining song.

As I’ve mentioned a few times in different ways, Corsica Lemonade is very fast paced overall. The bits that sound like they could collapse – from fatigue if nothing else - into southern rock or funk mediocrity end up pulling themselves together with the sheer gall of the very curious juxtapositions. A smattering of unpredictable percussion here and there and then BANG! Wide awake and ready to confuse, bemuse and amuse all over again. It’s self renewable like that.

It’s definitely a heck of a lot of fun, and you can tell White Denim had a lot of fun recording it, how could they not? But the overall production is a little thin on the ground – the bass lines are energetic but lightweight – and sometimes the vocals are a little too enthusiastic, almost like a student of the theatre who’s trying to prove they’re the most talented by being the most extravagant. You know the type…Darrrrrrling. (To completely contradict myself, ‘A Place To Start’ is simply delicious. A very pretty end to such a frantic album!)

I don’t know how much artistic satisfaction White Denim got from making Corsicana Lemonade, if any, but I didn’t get much from listening to it. Not necessarily a bad thing, because sometimes I can do with not having much to think about when I’m listening to music, clearing my mind so to speak. But if the music is so physically stimulating, then I’m not going to appreciate being taken on such a ride with nothing to show for it. It’s anti climatic. It’s frustrating. I could sum it all up perfectly in a rather provocative fashion but I don’t think the general consensus on music reviews allows for such graphic detail.

Fun and entertaining? Yes. Interesting sound? (Albeit in a mental manner), Yes. Artistically shallow and crowd pleasing production? Yes.  It’s the sort of album I could have waiting on my shelf for years, only to be played on that one stifling, summer afternoon, where you just want to sit back and be blown away. It has its day in the Sun and then is forgotten about for another couple years without ever being missed. I could take it or leave it.