There are albums that pass by your ear canals with far too much ease than a record should ever do. That’s not always a bad thing, by the way. In the course of reviewing music you can often pause for consideration a bit too long and lose the moment but hearing the ‘long awaited’ (as the band say rather cheekily!) new album If It’s The Last Thing We Do we were moved to put finger to keyboard instantly. 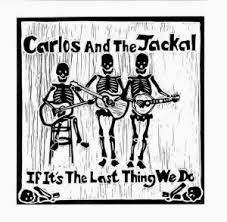 With a sound that is unashamedly straight and songs that are very relatable it’s a deceptive listen.  A strummed ukulele can be limited in its range but over the course of the ten tracks here it’s a blessing. Put the almost bakery like music together with vocals and lyrics that are perfectly unburdened with a need to over verbalise and it’s a refreshingly simple listen.

With a darkly sunny outlook on life, the character of the record as a whole suggests a coffee in the darkest corner of your favourite café and a notebook for thoughts. That’s not to say that the music is the same bland soundtrack you’ll hear in high street cafes, rather this is a character full, almost cynical worldview of a record that can’t help but make you smile.

Dust, for instance, suggests that even of things were perfect there would be a covering of dust to remind you of the mistakes of the past. Not Giving Up holds a slightly more sun lit perspective as well, with some entertaining comparison verses that raise a wry smile more than once.

The album as a whole though exudes that folk imbued world weariness of a seasoned band that is keeping the setting firmly on chilled. Nothing is beyond its scope, with social media, credit ratings, politics, dust motes and coffee on the lyrical check list more than once. A pleasing Bluesy element keeps the proceedings bitter sweet enough that the oft-ironic and very literate songs flow like a pleasing evening in the corner of your favourite drinking  venue .

Perhaps what we want to say is this: there’s much to love on If It’s The Last Thing I Do – and despite initial suggestions of a stereotypical country-blues trapping it soon worms its way into your affections like an old friend. A warm, lyrically generous collection that is perfectly simple and unpretentious in its aims.

The album will be released via Addistock Records in March 2014.