When a comic comes with no less than seven (count them – seven!) different variant covers, four of which are glow in the dark subscriber gifts you know it’s gotta be something big. (Or, with very obsessed fans…)

Of course, everybody knows The X Files is big. When they relaunched the oft neglected line of The X Files comic adaption’s , IDW did something very good. Topps Comics’ long running series was visually impressive but despite strong writing still had the occasional miss but thus far IDW have impressed. The Season 10 range is certainly an excellent read and has developed in a satisfactorily slow burn manner since its first issue in June 2013.

Now that 2014 is well and truly here they’ve gone one step further with the rather interesting proposal of The X Files: Conspiracy. With a six part main series and some connected one shots featuring crossovers with a bunch of characters as diverse as Ghostbusters, Teenage Mutant Ninja Turtles, Transformers and The Crow.

This spin off from the more serious main range is quite simply a fun idea. Yes – people will take it deadly serious and enter into rather long winded conversations on the modern equivalent to chat rooms (do they still exist?) but when all is said and done anything with The Lone Gunmen centre stage is sure to be somewhat off kilter! 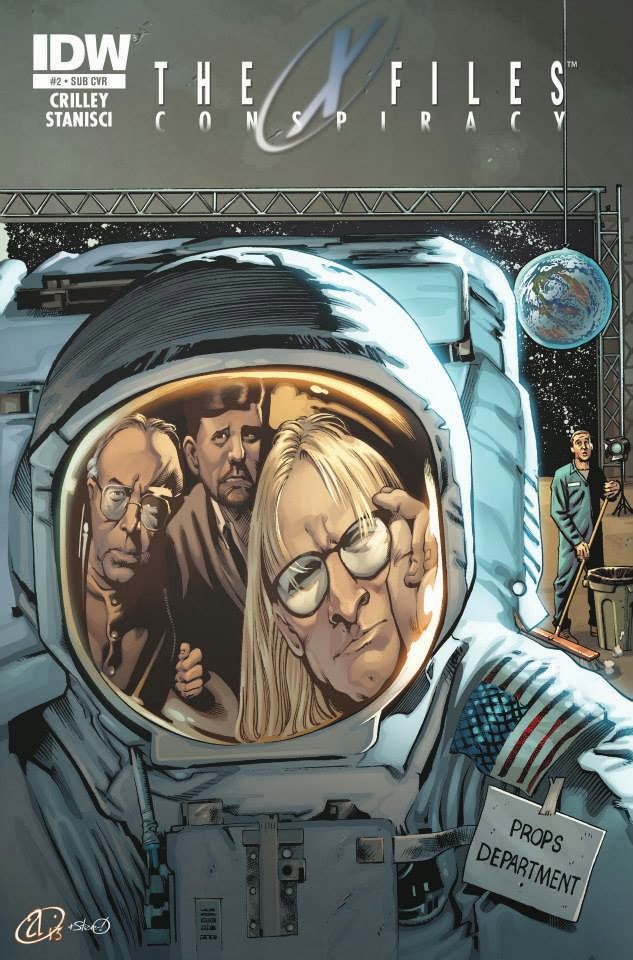 The first issue of main range The X Files: Conspiracy is a good opening salvo, ending with the arresting frame of the viral outbreak concerned taking a rather nasty turn in a prediction, whilst it’s same month release companion that sees the trio pay a visit to Ghostbusters HQ is semi serious in tone, happily avoiding the geek-apt tendencies of the short lived but often undeservedly forgotten tv spin-off The Lone Gunmen enjoyed way in the early 2000’s.

The only thing that lets down the books is the art work perhaps,  the finished article nowhere near as eloquent as the main range  season 10 stories but then again not exactly sans hope either. It’s not far from the truth to suggest that the comic book return of The X Files started many people on comics for the first time in their lives or perhaps reinvigorated a flame long gone with youth.

Certainly, although we have always enjoyed comic art from a young age, it made us want to actually read a comic from cover to cover instead of merely admiring the brush strokes. Comics are a form of literature that is very valuable and very accessible to those willing to open their minds to it. Yes, The Lone Gunmen would never had met Slimer in the television series but comics make it all possible!

IDW continue to excel with their The X Files: Season 10 and Conspiracy ranges and it would only be fair to give it a go. If you loved the television series you will love the comic series just as much. The only difficult choice is which variant cover to choose, they’re all so damned good…