It’s the end of what has been a high octane, never ending delight in the form of The Bridge’s excellent second season. But did it all end well? If you’ve seen it you’ll know just what happened, but if you haven’t yet caught up you are in for a very big surprise… 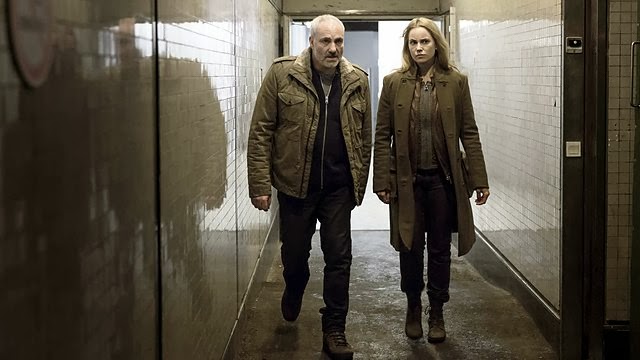 Apologies, it’s taken a while to write this. In between watching the premier of the episode nine at Nordicana and contemplating the conclusion (and in many ways set up) of the finale it’s been a long weekend. But to business, The Bridge this season has been one of the best viewing experiences we’ve had since The Killing.

Of course, you know that already and in this pair of episodes it’s taken to new heights. From internationally intended air borne plagues, death and multiple personal tragedies this conclusion has it all. Episode nine looks like the end at first, but before you can even think about what episode ten will contain Saga is back in the office looking determined again.

When he is told to get out of her affairs, he takes it rather badly and tries to strangle her – all very well acted with the nuances just right. But in the twist that really changes the course of the story, his wife Gertrud is watching on said cameras and intervenes, smashing Oliver on the head with a very nice lamp. (It’s the perfectly good lamp I feel sorry for!) He’s dead – and the game begins. Who did you think was behind the clinical tests we’ve seen so graphically in recent weeks?

Yes, Gertrud.  This provides the dramatic key to episode ten. With the EU conference on Viktoria is speaking. And Gertrud has turned her into a walking contaminant. Once she bleeds, the whole building is infected.(I did wonder just what Viktoria was injecting herself with in earlier episodes. Definitely nothing as strong as what she eventually dies from, taking poor Pernille with her, shooting herself in the head before the internal bleeding begins. Although, you do question just why Pernille and the others wouldn’t be wearing a protective suit if she knows there’s a known lethal virus about to be released. True, Saga was quick enough to shut off the ventilation systems but that’s minor when you consider the bigger picture.

In two episodes, Martin lost the love of his wife and someone who was potentially special to him in the form of Pernille. You may think Saga has issues, but the sheer Nordic Noir tinted gloom of these episodes is astounding and highly effective. Martin was shown to be doing well, fleetingly given his old life back but it’s all pulled away in one fell swoop when we see the concluding minutes of the series finale…

Saga in these episodes breaks down considerably, losing Jakob and her cool when she learns that Martin read the files on her sister’s death. Her violent, desperate scream is enough to show she felt betrayed as the iconic car sped off into the distance away from a very sad looking Martin. But we do see her shed tears as she realises Jakob has basically dumped her, citing the fact “it wasn’t working”. Their conversation is quietly touching and her disbelief is heartbreaking. In The Bridge, no one can have a happy life.

By the time we reach the closing minutes of episode ten, relationships have changed and ended irrevocably, tears have been shed and a desolate, palpable gloom hangs over proceedings. With the two women other than Saga in his life gone, he’s back in his hotel room, tears in his eyes. Saga is back to being alone as well, in a very literal sense.

When the news of Jens’ death by a suspected overdose hits the news Saga is immediately on the case. But the suspect is someone very close to her – Martin. The fact he does little to deny it more than clouds things up. (In fact, retrospectively it’s not concretely stated he did.) But despite Saga admitting that he is probably her only friend in a very poignant moment, she takes the evidence against him in and then comes the knock on the door…

With Martin driven off in a police car, even more cut off from his family than ever, and Saga alone again what will be the plot of the already commissioned third season? Whatever happens, it’s going to be interesting… 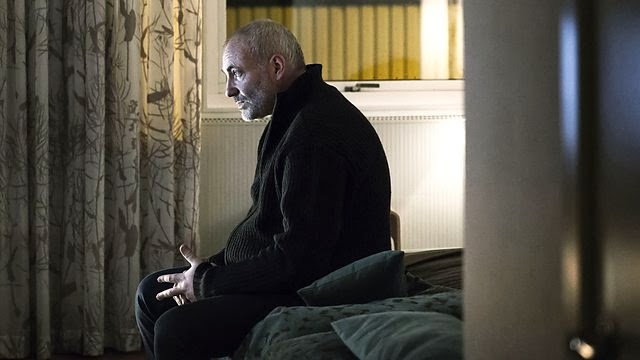 Ten episodes of gloom are enough to wear anyone out, but the development of characters this year was excellent. Saga gets vaguely warmer, finds and loses a relationship from her own unwillingness to compromise to any perceived concept of a normal relationship. (Again, a questioning of the rules of the game that works very well on a personal and dramatic level.) We even learn just why she doesn’t see her parents – she framed them and put them in jail to rescue her sister. Martin isn’t unscathed either, with losses on many levels mentioned previously.

The panels at Nordicana certainly illuminated the actors’ approach to the characters, their frustration with an occasionally inept line of questioning from the host obvious on occasion. But for such a rewarding series you can only applaud them, the work that went into the characters is wonderful and on a creative level up there with the very best. Tak very much for a wonderful second series – we’ll certainly be here for the next!