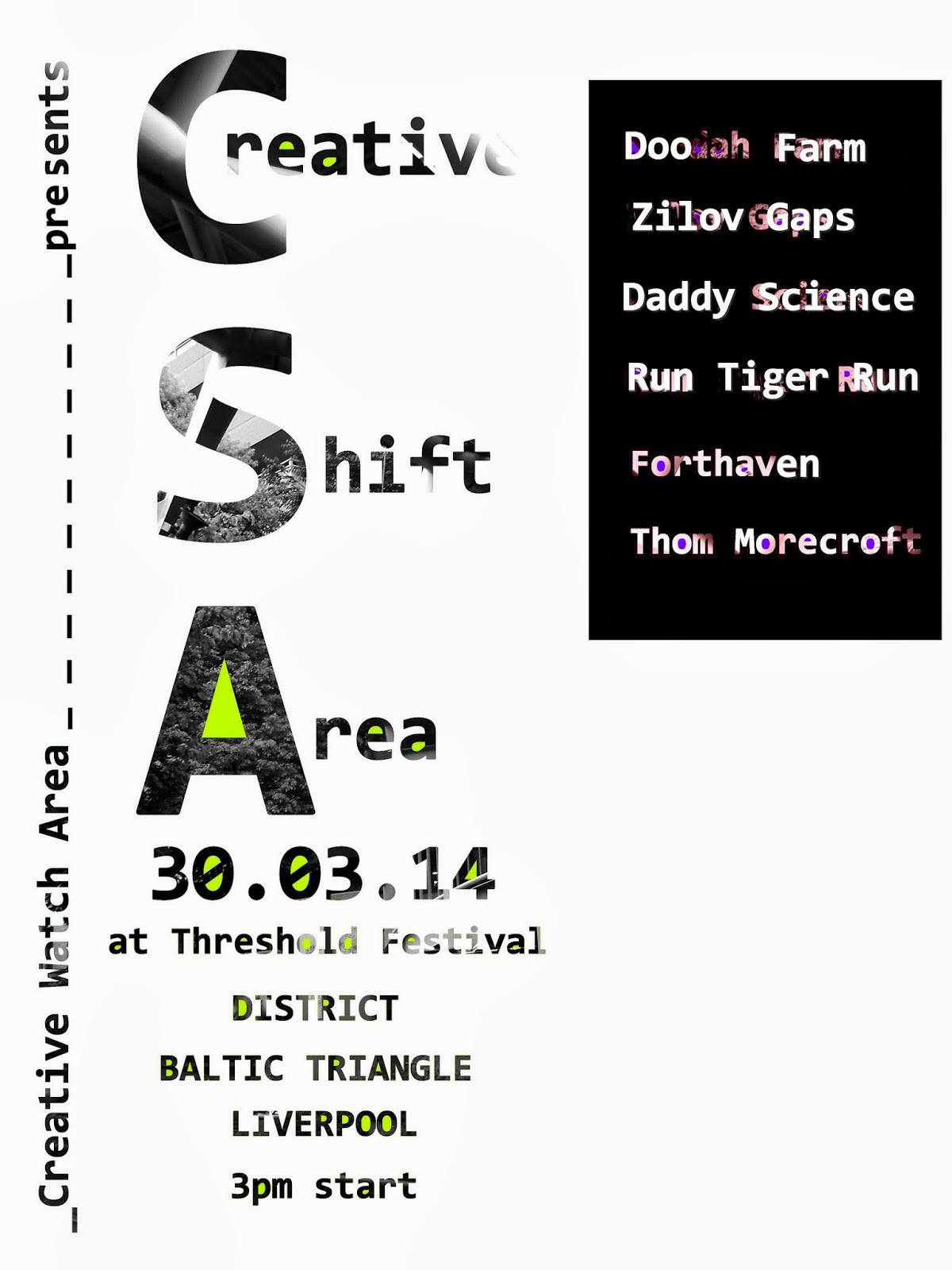 Creative Watch Area is proud to present a very special event at this year’s ever excellent Threshold Festival of Music and Arts, held in the cities up and coming Baltic Triangle district.

Creative Shift Area will take place on the final day of the festival, the 30th March at District and will feature the following excellent bands: (Tickets from here)

Thom Morecroft: recent triple prize winner at The Liverpool Musicians Awards (Best Solo Male, Best Acoustic Band and Best Album) and all round nice guy with a voice that is as charming and distinctive as you could imagine!
Doodah Farm: are a four piece folk rock band playing toe tapping tunes to shake a tail feather to. The first murmurings of creative energy came when Stevie Myler got himself completely sober for the first time in his adult life and, after many years of playing other people’s stuff, realised he had more to say. So when he bumped in to old friend Mark Dickinson they started playing their own material as a duo. Luckily that’s when they met Joe Lamb and Jordan Atkins. Joe had come, Ukulele in hand, to make his fortune and Jordan. So with the final piece’s of the jigsaw Doodah Farm emerged.
Forthaven: a Rocktronic act which uses live instruments and technology to create emotive soundcapes akin to laika and curve. Forthaven is the result of a professional bass player turning to producing, which has resulted in a blend of live instruments and electronica akin to Massive Attack, Laika and Curve. The debut album, Histrionic, was released on the 30th of September 2013 and comprises of 22 tracks.
Zilov Gaps: is guitars, electronics, basses, beats, drums, vocals, synths, glockenspiels and more. It’s post-rock but with vox; electronica but with guitars; shoegaze but with beats; melodic but with epic noise-fests. It's the space between everywhere else, filled with massive, wondrous noise
Run Tiger Run:  Run Tiger Run are an unapologetically indie rock four piece with a focus on rhythm and texture, embracing sounds of post-rock through to dance pop. Having taken on many forms prior to the summer of 2013 they have now played the majority of venues Liverpool has to offer in such a short space of time, supporting the likes of Catfish and the Bottlemen, Jaws, Coasts and more.
Daddy Science: Acoustic Electronica from one of the vocalists from Manchester Hip Hop collective Coupe De Ville.
More announcements will be made closer to the time of the festival.
Tickets are £5 on the day and £25 for a weekend advance ticket. Tickets can be purchased from Skiddle. Get yours now!