With the twists and turns of this quietly gripping but ever confident series getting even more twisty and turney Salamander is fast becoming the main reason not to go out on a Saturday night. These episodes kept the action going perfectly, removing one main character in the process with a very admirable confidence... 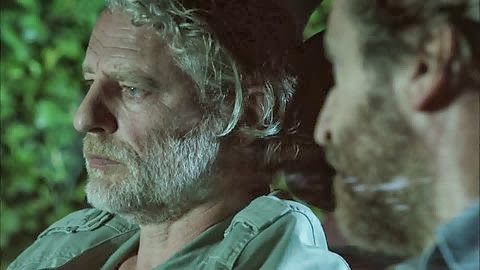 Following last week’s explosive conclusion, (in the most literal of ways), Geradi is now without his wife, her body now in a morgue burnt to death by a bomb intended for him. In all honesty, we’re not crying too much about her death as the two never really looked very much they were married in the first place and bar last week’s tender moments between them, never really clicked to our mind.

But, the plot is advanced in a dramatic style and that’s what these shows are about. Just as Martin Rhodes lost Pernille in The Bridge, so Geradi loses his partner here. The only difference, bar style of death, is that that this is the middle of the series. And Geradi is not a happy man! (Needless to say…) With his daughter, with whom he has a very good relationship it has to be said, offered a protective place in a boarding school by a quietly repenting Public Prosecutor at I9, he’s on the hunt for her killers.

The drama could be described simply in terms of words but it’s the central performance from actor Filip Peeters that makes the often by-the-numbers action gel together so well. His unflinching expression, rarely issuing a smile or even an emotional acknowledgement beyond disgruntlement (very understandable, all things accounted for!) are essential viewing. But when he breaks down in the hospital following his wife’s death, curling up on the floor in a foetal position it’s an effective moment.

It seems also that conspiracy and coincidence are also rife in the Belgium portrayed in Salamander. We’ll admit that we were very puzzled by the series’ title at first, and now that we know what Salamander is it’s all a lot clearer but still as murky as  a garden pond after the rain. What is their aim in toppling the country? We know that Jonkhere , from the similarly named private bank that was robbed in the opening moments of the series, is high up in the chain but what are they aiming to do?

With the dreaded brown envelopes and suicide tainted phone calls it’s getting like The X Files – not a bad thing, it has to be said. Certainly, this conspiracy is less murky and it’s method of execution even more simple than anyone would dare plan. There are car chases to be won, guns to be drawn and cliff hangers that are so simple they’re frustrating! This is drama that doesn’t seek to groundbreaking but merely to keep you on the edge of your seat. It works, as well.

Following in the footsteps of a slot occupied by Borgen and The Bridge on BBC 4 it’s a tough sell for such a regularly planned show as this but it’s winning slowly but surely.  The scenery of Belgium is certainly dark but not in such an obviously beautiful way yet it’s the characters that make this show work. The ruthless Jonkhere, the still could-go-either-way Public Prosecutor at I9 and his security men are all portrayed just in the right manner. We really don’t know if they will go either way!

With four episodes to go we will surely find out if anything comes of the coincidental meet between Sarah, daughter of one of the bank robbers, and Geradi at a networking party. Her daughter also going to the same boarding school as Sofie is surely a sign that something will come of this meeting. What next week brings… we can only guess!