The computer game influenced, triceratops sporting cover art for this recently released E.P. from Lady Neptune belies its true nature. Of course, we’re not ones to judge the music by its cover but one thing’s for sure, if that Triceratops is in need of some music to charge into a crowd of dinosaurs to, this is it. 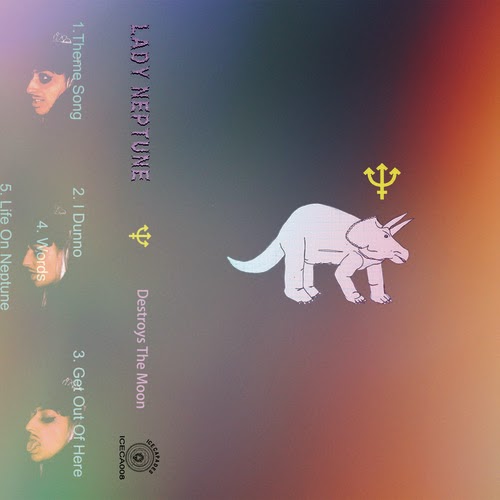 In all fairness, though, the cover art does a disservice to the distinctly not unlistenable music contained within. The dream pop imbued no wave edge to the music makes it a listen that needs to be concentrated on. That’s not to say you won’t want to listen, merely that its beauty needs to be savoured. The sheer dystopia of Theme Song is embracing and confusing yet not less than essential; ethereal harmonies meld with a hardcore psych inspired backing  and we’re not quite what it’s the theme song for, but it will have to be to something pretty darned special.

As Destroys The Moon continues, that aforementioned psych influence gets less muddier, with more vocals and a warmer sensation tingling along the spine. I Dunno, the second track is possibly just as it’s meant to be, with intertwining genres and an irresistible hook you don’t why you love it but you definitely do.

Slowing the pace right down, (and adding some classic dream pop ambiance), is Get Out of Here, where we are invited to do as the title says on a daydream. The opening half is just right daydream for us, and when the powered up backing returns half way through it’s a powerful moment that puts the record in perspective. Indeed, it’s here the experimental edges begin to show more overtly. The loop sketches and ethereal noodling that close the track are perfectly in place despite the fact you never thought a record like this could handle them.

But with the closing, fifteen minute epic Life On Neptune we find the real experimentation. The opening four tracks are like sketches of sound by comparison to this. Galactic interference mingles captivatingly with radio voices from the ether in a never less than ear catching style, and as it all builds into a cacophonous static, this experiment brings things to a close with sounds that would certainly fit into the Neptune scene perfectly. If you’ve ever pictured futuristic scenes of discos ruled by static rather than beats then this is just up your street. Scary, highly indulgent and never less than on the edge Lady Neptune has produced an E.P as fascinating as it is brave.