Prince. He is known for many things – primarily for his music. This new single was released following the announcement that he had made peace with his old label Warner Bros and that news bodes well indeed. But before the three decade anniversary of seminal album Purple Rain comes along there is the business of The Breakdown. 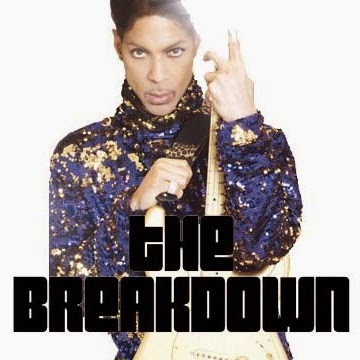 What would you imagine it will sound like? Certainly, the funk that the artist is known for would be a primary image that would enter the mind. It has to be said though, that whilst we love the funk and roll we also occasionally like the quiet, introspective Prince.

The Breakdown is exactly that – a quieter moment in the studio. Less bouncier than the joyous but hardly essential Zooey Deschenel featuring FallInLove2Nite and more fragile than the so-far released 3rdEyeGirl sessions; This song is just the right balance of things, a  mix of wise words and word play with a restrained muse on the keys.

We’ve had almost an album’s worth of songs from the various projects Prince is working on in the course of the last year but on one disc they would make a strange but beguiling melange indeed. The Breakdown is at odds with them all, brighter in its quiet yet all the more listenable for it. There is much to praise the artist who keeps his muse fresh, and this single track is on its own well worth a listen for sure.