On The Scene // SNØKRYSTALL at The Nordic Church, Liverpool.

#srcz loves churches, music and Nordic culture. Put all three of those together and you get a gig at the beautiful Nordic Church in Liverpool. Our man on the scene Joseph Crawford gives us his accout of a very special night... 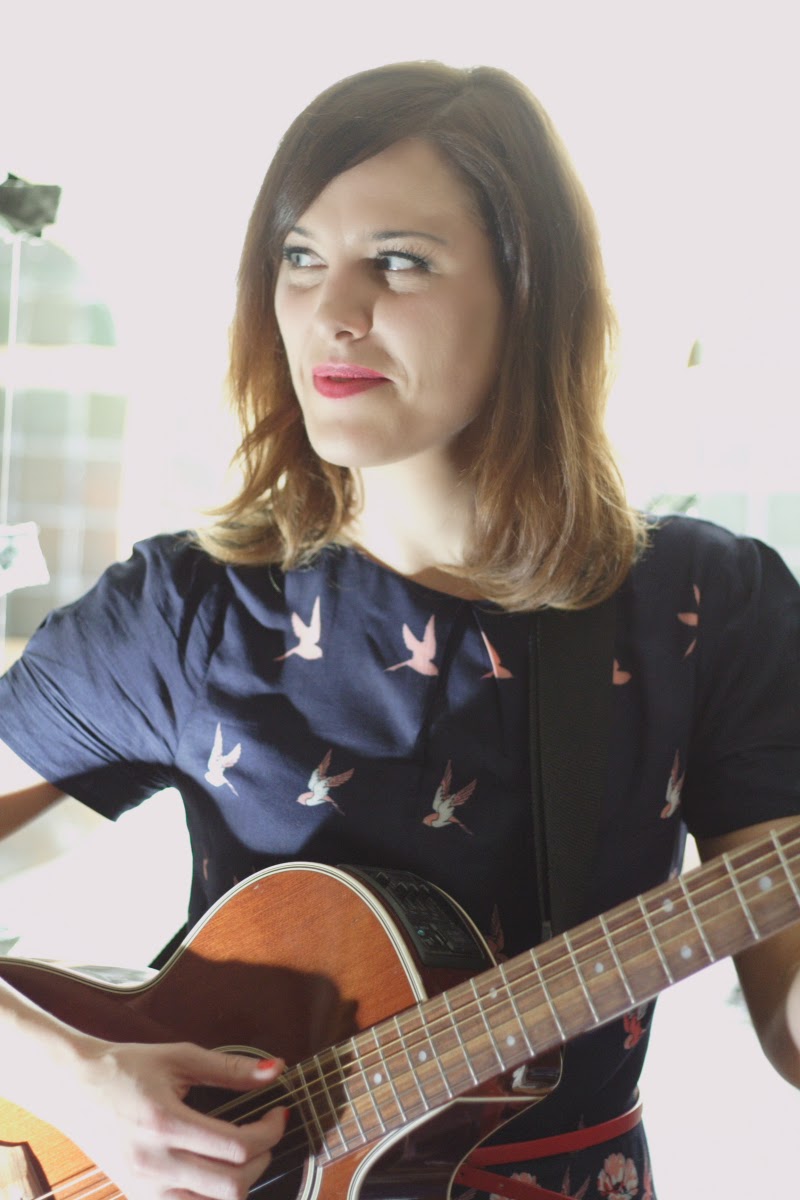 It’s Friday night and I’m in a church. It’s pretty ridiculous, but so is spending half your paycheck gulping down lumpy throatfuls of Popworld gunge for the twelfth night running – and this time it’s only to get pissed enough to stave off this cancerous boredom and still the decay of your poor brain’s whole left side! It used swim in creative juices… now look at it! All the while we, the live arts community, commune with wine and music - having our senses stroked by visual treats and strummy, yummy beats.

The Nordic Church here on the brim of Liverpool’s Baltic Triangle had already welcomed the likes of Moxxie, Alpha Male Tea Party, Silent Cities (and so many more) during this year’s Threshold Festival with open arms – and here I am again, thirsty for more. Less thirsty now I’ve got my wine bottle open. Damn surprise corkscrews! And no I didn’t sneak it in – it’s bring your own booze night, and I’ve spent a fiver on 750mls of Spanish red; 13.5% alcohol, and 86.5% pretentiousness.

Having heard next to nothing of Ragz Nordset or Henry Pulp, I can only imagine what lies ahead. I spy Threshold’s own Chris Carney jocking the pre-performance tunes as X-Ray Katt, and I’m reminded of the community these wonderful people have helped to create. I hope there’s time for a quick cigarette before the show…

No there isn’t, and I’m late for the introduction. Taking my seat, the small hall is already awash with acoustic pleasure from a three-piece electric/acoustic guitar and bass, identified to me as Henry Pulp. Resembling a drum-less Kings of Leon, Pulp’s sound consists of entrancing fingerpicking style ballads with strong vocal drive. Pulp himself is impressive, but I’ve never understood acts with 0 percussion (he says waiting anxiously for Silent Cities). A lovely opening, these three timely gents are worth clocking.

I am later informed that Pulp also has a 10-piece big band which can be found on Soundcloud. A good thing too: I am a beat-driven animal. Pulp’s fingerpicking is so consistent that the rhythm never loses pace, and songs of love and loss are performed with a genuine longing from this talented three-piece. They end as perfectly as they began – my cue for another cigarette before the next dose of entertainment. 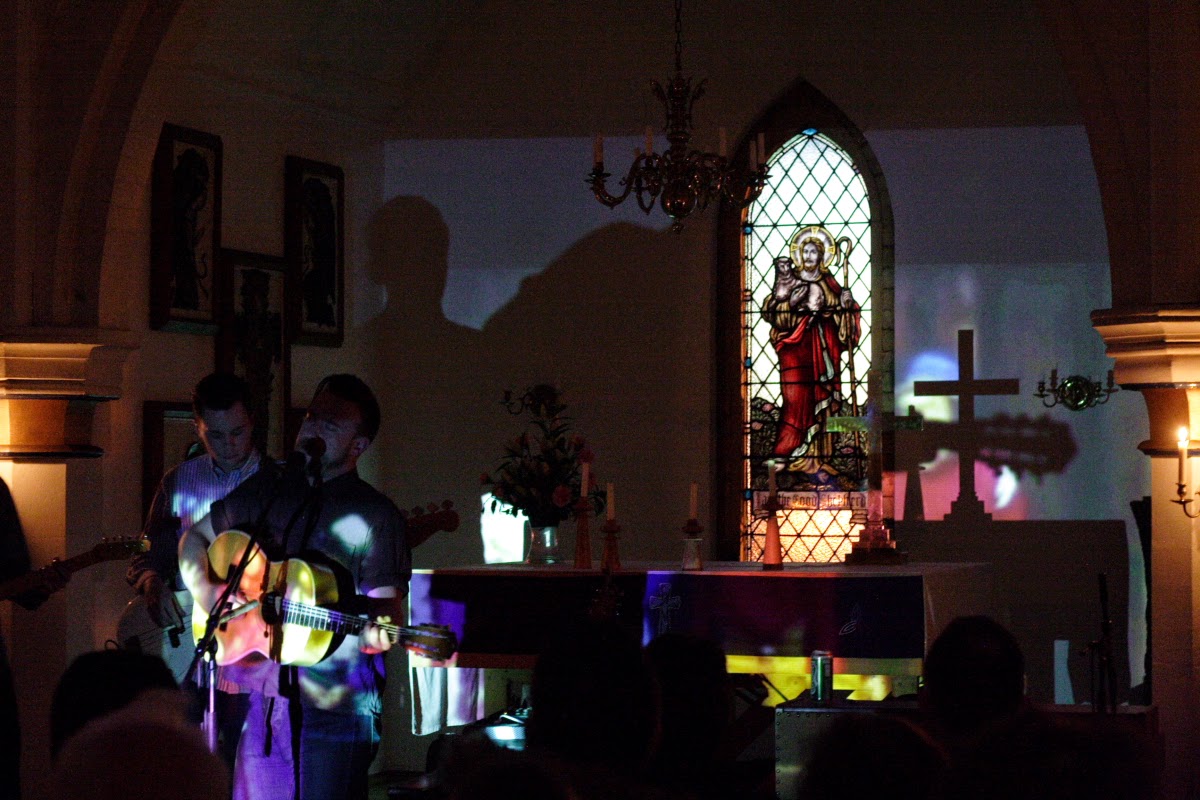 By now you will have spent hours, days, weeks craning over illegible textbooks that sound like they’ve been written by pompous intellectuals with predilections for polysyllables… and now you need entertaining. You could try the Krazyhouse again, or perhaps Mojo… again – or you could shake off the routine and see something exciting instead!

Mellowtone/RebelSoul have done a wicked job with the décor – candles scattered across the floor, and glistening art pieces hanging from the walls. Most impressive are the light projections on the dome wall courtesy of Wunderkammer: visual representations of snowflakes, crystals and universal wonders. Pouring myself another glass of wine, the audience’s mood is feeling loosened. Strangers becoming contacts, conversation becoming banter, and I can swan around at my leisure before the next act starts. Speaking of which… 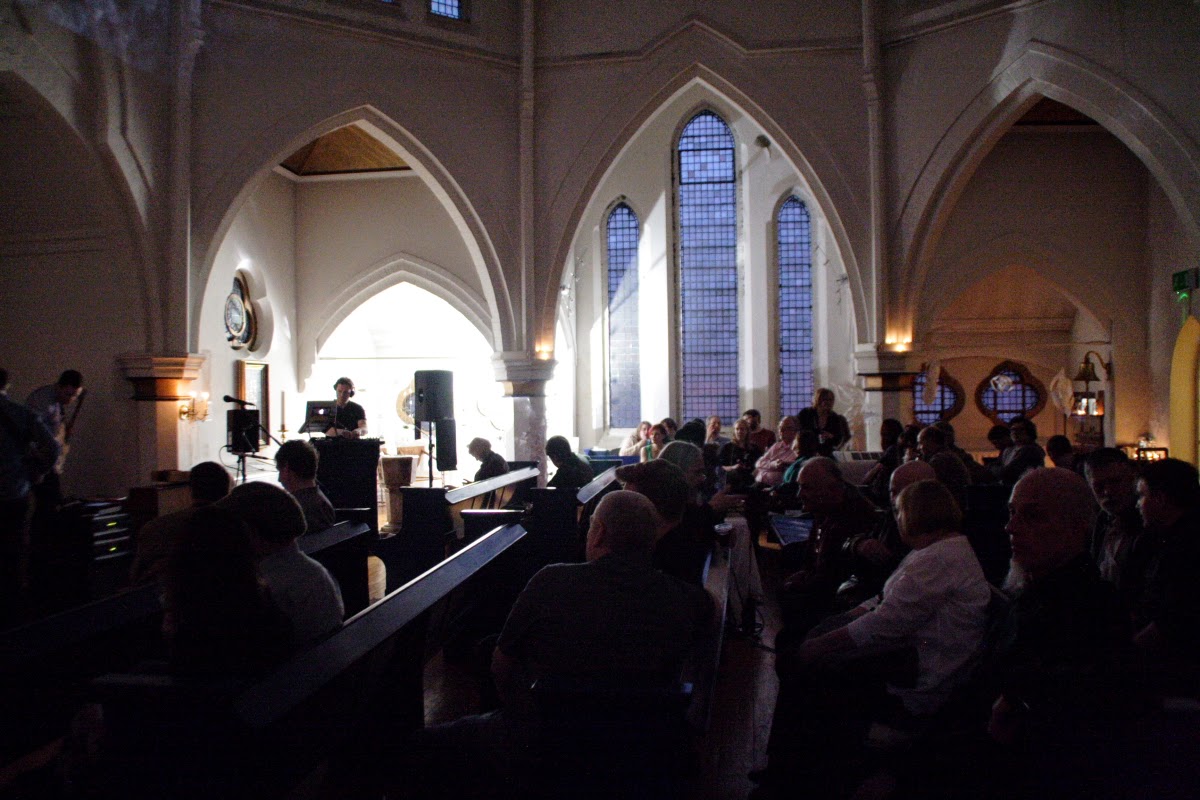 Between worlds in this Anglo-Nordic church, Ragz said she felt ‘right at home’, taking a moment to teach us a Norwegian greeting before striking up her first song. Having supported acts such as Noah and the Whale, Laura Marling, and Wild Beasts, I had high expectations as she began her first song.

She was like a bird. For her first gig this year, Ragz (pictured) swept out of her cage with such refined grace, we were all spell-bound. A beautiful singer; falsettos rise and fall, transitioning perfectly from grounded altos to lullaby guitar picking. Another drum-less act, it seemed this place was too revered for much percussion – but for once I wasn’t complaining. ‘Jamie’, a song about a deceased friend, is over too soon, and with each song we are given a glimpse into Nordset’s personal life. Clearly a very empathetic human being, Ragz’ material centres on deeply personal events with story-based delivery. ‘Realist’ is a potent end to her guitar set.

On to the piano and singing in Norwegian, we are treated to a rare and lovely performance. ‘I’m gonna leave you with one last snippet of Nordic-ness’ she says – an acappella requiem that she belted out in her native tongue with passion. She was radiant. 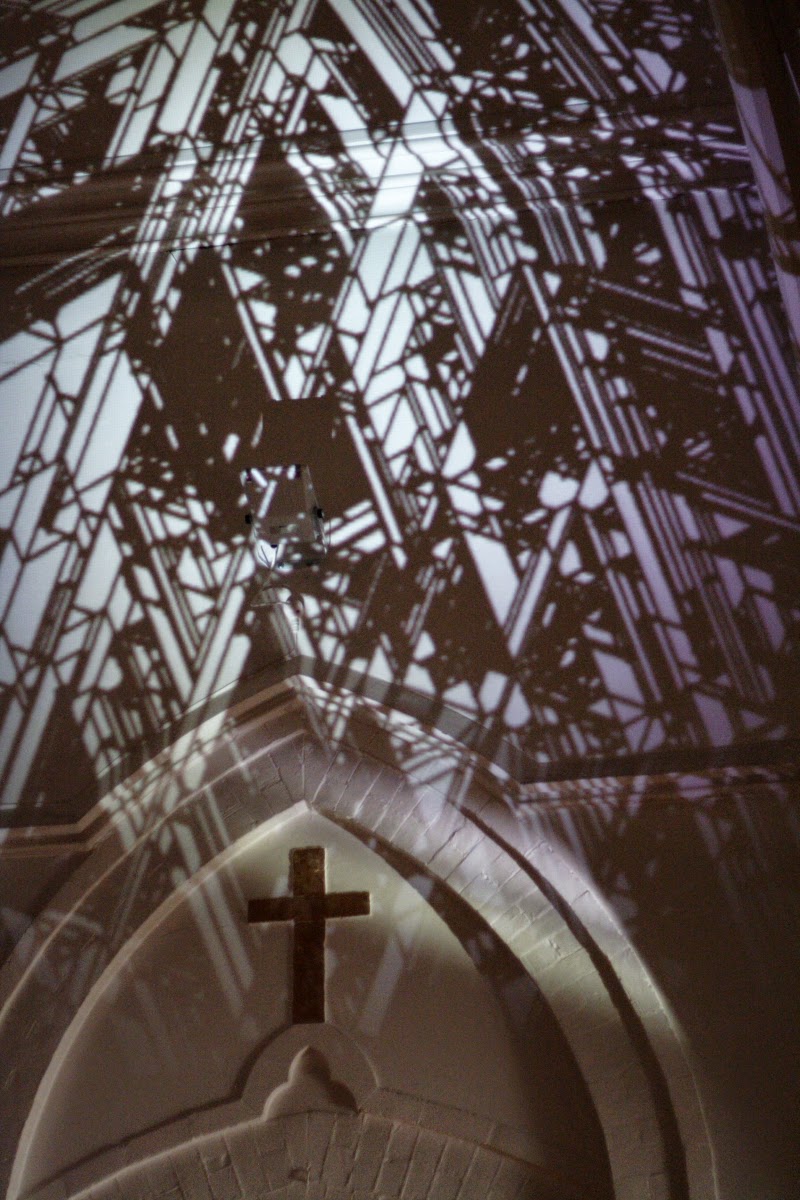 Reading these notes back is getting a little difficult now - my eyes are blurry from the performance, but it could very well also be the wine.

Still think that getting sloshed in Yates’ surrounded by footy nuts and the stench of voyeurism is your only option for the weekend? Nonsense! You can be getting sloshed here surrounded by freaks, geeks, and good people in musical solemnity! And no I’m not against football: who doesn’t love the thrill of supporting something? If you’re feeling neither red or blue though, pick up a music mag (they’re free) and see what else you can be supporting. Like this…

When I saw that Simon Maddison aka Silent Cities was being accompanied by cellist, Luke, I knew we were in safe hands. The announcement ‘ladies and gentlemen – Silent Cities!’ was followed by applause, and then total silence.

An electro-warped rivet stemmed from the front along with Cities’ tremored voice, and after a hypnotizing opening, the cello gives wings to ‘Global Aerobics’. At each fall, the audience is so still you can hear the pressing of the guitar wood, and the cello adding another blanket on the warmth of the room. Projected on the walls is a map of the constellations – as if we needed to feel any more like we were in space right now.

‘Haptophic’ finishes with a whispered ‘thank you’ and the cheers from the crowd are spotted with anguish. ‘Bass and drums never really seemed to work, but Luke here filled the gap’ Simon says, and I can’t disagree with him. It’s against the rules. ‘I don’t usually talk this much in gigs – I must be making up for all the others. Or it’s the gin.’ We are informed that the new material on the way ‘is all being funded and produced by RebelSoul’, and the response ‘is it?’ from the back gets a big laugh, bringing us back from the lonely precipice. It’s easy to get lost soul-searching during Cities’ performances, and I mean that as the best compliment I can imagine. We were a collection of lonely animals bathing in the music of the solitary. Sounds like a fairly typical Friday night to me.

Even after a string snap, Simon still finds a use for the dead metal, caressing the guitar neck and creating new atmospheric sounds – it’s magic. ‘Beating Heart’ is of the last tunes played, and the last reverbeautiful echoes die around us. As ever, Silent Cities was as consistent as he was engaging: never failing to turn his audience completely subjective.

"Right on Your Doorstep..."

So in fairness, I didn’t leave home with some red hot chick desperate to tear my clothes off at the next hotel like I always hope will happen on a Friday night, but I did leave with something else. I left that church with a skip in my step - the words from our host Mark ‘Monkey’ Ross of Mellowtone ‘you don’t get this anywhere else’ still ringing in my ears.

Want to try something new for a change? Try this; real Liverpool, real music, real people.