‘It is better to fail in originality than to succeed in imitation.’(1)
Herman Melville.

How time flies when comics flood an already over saturated market… On May 3rd Free Comic Book Day (FCBD)(2) returns and all around the world ‘paper pamphlets with pictures of pretend people doing and saying things’ are given out, for free, hoping that new customers are created and will return to buy more, becoming the readership of tomorrow. (That is, before the arse falls out of the business and a comic becomes a fascinating relic of yesteryear - like a Walkman or an Artic Roll - where children hold the flimsy four colour pages in their hands and stare intently at it, waiting for said artefact to shoot dancing images from it or at the very least read out loud to them… or somethin’… #GrumpyOldMan... twitter feed clogged up with nonsense, who are these people on Facebook?, modern day is rubbish… blah…blah… IIIIII don’t believe it!  ETC ETC)

What’s on offer then? Really getting to the Heart of the Matter

(As the above sub-title explicitly states, here I will be really getting to the heart of the matter.)  Companies try to distil into one product both an easy ‘in’ to their (usually) monthly serials as well as something (hopefully) palatable for a wide reading audience- taking in age, gender, race and cultural background- and for those coming to the comics who are not overly familiar with the characters, concepts and story set ups within said pages. (However, maybe someone should have mentioned this to DC Comics (3).)

DC and Marvel are known as the Big Two in the comic book world with their superhero characters and comics being world famous (this year for FCBD- DC offers Futures End and Marvel has Guardians of the Galaxy(4) available) but I will be casting an ever beadying eye - there is not one day that passes where it doesn’t become even more beady - over ‘hidden treats’, ‘buried treasures’ and the more unique and original comics that probably won’t be getting the promotion they deserve (and need). So with only the commonplace blurb and a five page preview per issue to help me, let’s check out what looks good:

And a thoroughly good time was had by all:

When it comes to comics all that’s wanted is an enjoyable, easy read with, hopefully, fresh and original ideas- yeah? Something without a complicated back story (see ‘Endnotes’ below) and not based on already existing characters from another medium?  With that said there’s only a few comics that fit that criteria and bizarrely- and extremely heartening- they’re kids comics. 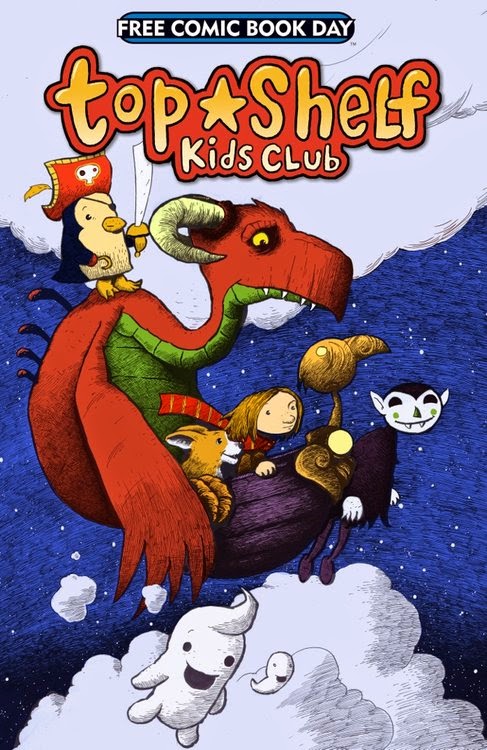 First up there’s Top Shelf Kids Club with a preview of the upcoming Maddy Kettle: The Adventure of the Thimblewitch by Eric Orchard that looks to be a treat no matter your age. The other half of the comic is dedicated to a strip by Rob Harrel, cartoonist creator of Monster on the Hill (which was given a glowing review in our Comix Column last year). Check out the preview here:

http://www.freecomicbookday.com/catalogimages/STK_IMAGES_PDF/STK620001-640000/STK633795.pdf And for more information on their kids’ comics line, that includes characters such as Johnny Boo, Owly and Dragon Puncher, well lookie here: http://www.topshelfcomix.com/contact/join-kids-club

Better than this year’s RoboCop remake – I promise! 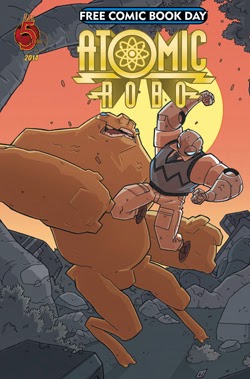 Atomic Robo has been quietly amassing fans, awards and plaudits since first being published in 2007 by Red 5 Comics. Always involved in FCBD this year is no exception with the publication of Atomic Robo and Friends. The character is a sentient robot, created by a fictionalised Nikola Tesla, who has many an adventure over the decades, functioning very much like the popular comics and movie character Hellboy. Atomic Robo’s main adversary is Baron Von Helsingard- an immortal Nazi scientist- but no fear, the robot hero is helped out along the way by Jenkins- an Action Scientist no less- and a superspy named The Sparrow.

Atomic Robo’s adventures can be enjoyed by fans of the aforementioned Hellboy, and for those who are wistful for the simple and straightforward fun of European classics such as Tintin, Asterix and The Extraordinary Adventures of Adèle Blanc-Sec. For an example of pages from this year’s FCBD freebie, check out:

http://www.freecomicbookday.com/catalogimages/STK_IMAGES_PDF/STK620001-640000/STK634426.pdf For past years FCBD comics, as well as other free to read issues, take a look at http://www.atomic-robo.com/free-comics/

Have we met before? 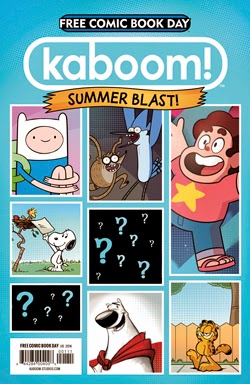 Come FCBD a fantastic 48 page preview collection of the comics published by Boom- under their child friendly sub-imprint of Kaboom Comics-titled KaBOOM Summer Blast is released featuring comics based on Cartoon Networks’ Adventure Time and Bravest Warriors(5); these comics are superbly executed with real gusto, by the creators, and are pure entertainment for anyone of any age.  Other strips include: perennial favourites Peanuts and Garfield; the new and wilfully weird Steven Universe and Regular Show; the continuing adventures of the characters from the Ice Age films, and Mike Kunkel’s comic book original Herobear and the Kid. The quality is high and these award winning comics are beautifully put together: this is comics at its best! For a preview go to:

As always this year FCBD is about finding something NEW to read, regardless of whether you’re a long-time fan or new to the medium. So, when you pick up your freebies(6) don’t go for the obvious (superheroes, known characters, or simply, whatever everyone else seems to be picking up) and stay in the shop for a while, have a look around and take a chance on something you know nothing about; for every 100 comics that are uninspired, unoriginal and embarrassingly generic, there’s one or two titles that have been crafted with love, bursting with new, fresh and daring ideas, and just begging to be discovered.

(1) The loud subtext and not-so -hidden meaning of this essay/article/reportage could easily- and cynically- have been titled ‘The Continuing Conundrum of Questionable Creativity in Mainstream Comics’ or ‘D.C and Marvel’s Creative Decline: The End Discussed (Briefly) Through Endnotes.’ But I would never be that presumptuous or pretentious (?)

(3) (Beware of spoilers in second link): http://www.freecomicbookday.com/Home/1/1/27/1041?stockItemID=STK634618
http://www.bleedingcool.com/2014/04/08/first-look-futures-end-0-big-time-spoilers/
DC Comics’ The New 52: Futures End is set in a possible future where the DC Universe is in great jeopardy so Batman comes from 25 years in the future, to just 5 years in the future, hoping to save the day. The Batman featured, though, isn’t Bruce Wayne but Terry McGinnis from the cartoon series Batman Beyond where Bruce passed the mantle to him but still helps out... oh screw it I’ll just send you to Wiki: http://en.wikipedia.org/wiki/Batman_Beyond . The New 52 in the title relates to the fact that in 2011 DC Comics restarted all of its comic book line and… ah fuhgettaboutit- off to Wiki you go: http://en.wikipedia.org/wiki/The_New_52

(4) It looks like Marvel has thought a little more clearly about their FCBD offering as it is a comic book introduction to the next big Marvel Movie ‘Guardians of the Galaxy.’ (With a preview of the next big Spider-man story in the back of the comic [ALSO starring in his own film this summer.])That seems to make more sense as the stories, as described in promotional text for FCBD, are straightforward introductions to the characters.*

After heavily criticising (Marvel and D.C.) comics’ habit of unoriginality as well as too much cross-pollination between mediums, I’m now going to (seemingly) contradict myself by suggesting you pick up this title. The difference here is that originality is the number one priority when it comes to the kids cult cartoons Adventure Time and Bravest Warriors** and that translates to the comic titles (the shows and comics share creators who work on both). Not only that but both series’- TV and comic-have won a slew of awards for their consistent quality.

(6)Because-to (really, really) paraphrase (and/or misquote) Bill Hicks-‘Remember, you are free to pick up for free what we tell you to pick up for free because that’s all that’s available.’***
*HOWEVER, the movie isn’t out till August so wouldn’t it make more sense if the GOTG movie was to come out BEFORE the GOTG comic on May 4th, so anyone interested in a comic with the same characters from the film they’ve just watched, can toddle off to the local comic book shop (LCBD) and pick one up for free, leading them to (hopefully enjoying it and) buying more. As a huge movie studio probably won’t work around FCBD maybe Marvel should’ve brought out a Captain America comic instead, as that movie has already been released and everyone and their Aunt Fanny Craddock seems to love it, therefore there being an actual demand (for a CAP A comic) in which Marvel can supply to, instead of using a comic- the GOTG one - as an advert or pre-promotion for a future movie. Mainstream comics seem to have become nothing more than colourful printed adverts to movies, merchandise and children’s toys and, IMHO, this is an ongoing problem. (But at least I’ve not had to put any links to Wiki to explain Marvel’s output: so they’re ahead of the game there.)

**And for more free fun from Bravest Warriors, check out its internet home at https://www.youtube.com/user/CartoonHangover as well as Adventure Time/ Bravest Warriors creator Pendleton ‘Pen’ Ward’s home on the web http://pwcartoons.frederator.com/


***Remember it’s not free until you can stop asking the question:  ‘Is this free?’ Just like you are not free until you stop asking: ‘Am I free?’ (Interestingly [or not] the parallels between freedom within the creative field- what is, and isn’t, expected/ acceptable for creators to produce and how that correlates to what’s actually available to buy [i.e. the facade of choice; only being able to buy what is offered] - and the way a free democracy works (or doesn’t) within a capitalist market place run by corporations, is an essay/article in, and of, itself.)