When a band is named (in big capitals to boot) DOG! PAPER! SUBMARINE! You really have no idea of what to expect. It could be an avant garde Jazz project, released only on microfilm or it could be a comedy side project. Anything, in fact!  Thankfully, (and in no way disrespectful to avant garde Jazz or comedy side projects), this EP is tinged sharply with the sounds of rock and not in the barely there you wouldn’t notice it way, either. 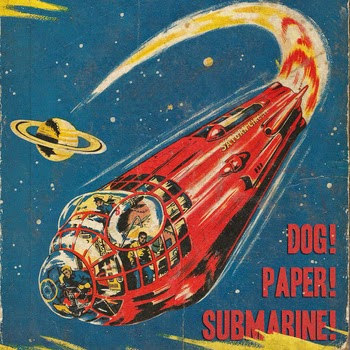 Over the six tracks (seven if you buy the physical edition) the Malmö, Sweden based band impress as they mix the oddest and most listenable of lyrics with the sound of a rock band doing what it does best. (That’s rock out, before you ask.) But in listening to the whole EP you never feel as if you’re listening to a one-tone garage session that served the only purpose of disposing of some beer at all. Nor does the fact that their hometown is in Scandi-fiction a crime den make you think they’re up to no good.

Rather, there is a knowing melodic quality to the music that goes above the concept of rocking out. Giant Crow is an art rock meets indie earworm, hard on the guitars but equally as easy to picture; ‘A giant crow sitting on a Russian rainbow’ anyone? The EP as a whole keeps an atmospheric edge to the proceeding throughout, even as styles are amped up and those perhaps uniquely Swedish images-as-vocals so often found in the country’s music fly by delightfully.

As digital format closer ‘Be Afraid of The Man on the Moon!’ beeps into surreal life, it’s easy to understand just what’s going on. That is, they’re subtally hinting you should stop listening on BandCamp and buy the damn EP! The man on the moon may be alluded to as sinister, but even such a cold hearted being as he surely is would warm to the off kilter charms of DOG! PAPER! SUBMARINE!