The cover art for Noah Francis Johnson’s new release the Harvest Tree E.P sums up in many ways the content of the record. With just four tracks, there is more than enough to satisfy the listener who thinks the music is just as important as the words. Of the whole product, I’ve Been Thinking is the undoubted highlight, with its world weary lyrics contemplating everything from the front page woes to the human race in a wholly fulfilling style. 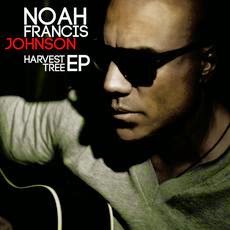 But, to explain why the cover art so reflects the music, the man and his guitar (with the odd bit of orchestration on For A Long Time) simplicity of the record lifts it higher than perhaps it would have were there more tracks. The stark but soulful voice of Johnson paints a picture for us of the words he’s singing so effortlessly it’s enviable. But beneath the simple arrangements lie a real world concern, there are some pointedly political moments that hit home in just the right way. That is, never preaching but definitely weaving a compelling narrative.

The whole E.P. does have that quiet urgency though and it shines through in the moments you’re silently agreeing with what he’s saying. Music, for a long time, has been an instigator in social revolution and when you hear Johnson expounding on what wrongs need to righted, it is hard not to wish music would become the marching beat of change it once was all over again.