In the course of their short but eventful career, Death Grips did much to revive the idea that music could still be surprising and more than a touch anarchic.  Of course, anarchy is something that is hard to do well in these social media imbued times of technology but Death Grips were anything but complacent in their relentless pursuit of their art. 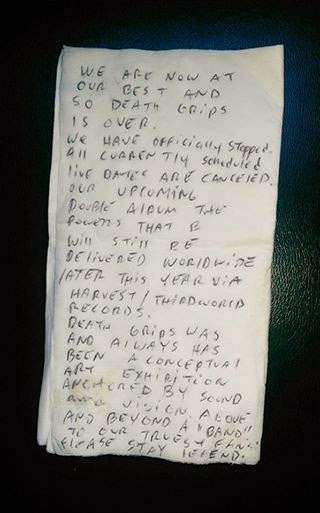 Equipped with a punk fuelled ethos, genius beats that threatened to tear you into submission and a carefree attitude that occasionally irked some people, the trio made music that is nothing short of prolific and never less than eye opening. When we first heard Death Grips it was via their Epic released The Money store, and despite their more easily accessible sound on said album we were hooked. But after downloading Exmilitary, their debut mixtape, the illness was contagious.

Many writers have said that Death Grips are one of the few bands to make you think ‘WTF?’ on first listen, but that’s a statement of the truth. Noisy, addictive and prolific they were a true light in the increasingly fragile music scene. That we got five albums from them is something to be happy for. In truth though, and this is perhaps a factor in their napkin-written goodbye last week, could they have done more to impress?

Five albums is a number few bands get to and in the factor of things, they never gave us a truly bad album. Arguably, one patchy album out of five is a good ratio on these terms. Said album, Government Plates, is still a good listen as well, the kind of patchy your average band will sacrifice members for if it were legal. Indeed, just what they do in the future is something to think about as well. How do you follow Death Grips? Only they truly know…

But what of the napkin poem styled au revoir that was posted on social media? It was goodbye, that much is obvious, but with their final album due later this year it’s certainly an early one. Plus, by cancelling all upcoming tour dates they not only add a certain mystique they also continue their carefree cancelling of shows with the ultimate, very sudden goodbye. But Death Grips aren’t into goodbyes; that is easy to notice.

Featuring none other than their fellow boundary pusher Björk, the recently released first part of final album The Powers That B is an experience in itself and as we’ve said previously, the combination works surprisingly well. If this had been a final release then it would have made perfect sense. But wouldn’t it have been good to see these two on stage together just once? Death Grips fans have reacted in every possible spectrum of the emotions to their announcement from the ‘good luck’ to the not to be unexpected ‘fuck off’ and despite all that, you have to admit that, short of a Patti Smith inspired UFO arriving, a napkin poem stylised note is just so Death Grips it’s perfect.