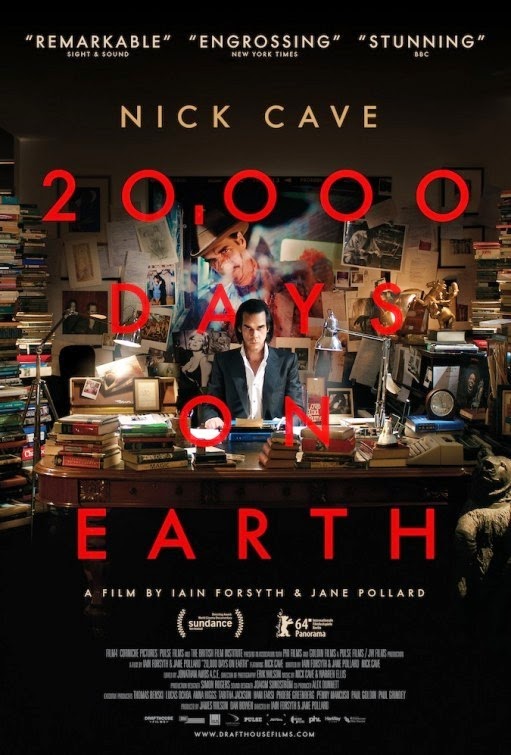 Rock documentaries are rarely as profound and soul-impactly impressive as 20,000 Days on Earth. Documenting, as it does, a span of time with Nick Cave, creator of many a challenging and often beautiful lyric, that’s no surprise.

But, no matter how profound a lyric is, it does not a properly realised movie make. It’s often the case when watching the film, that the visuals hit you in the eye and the accompanying narration from Cave firmly in the soul.

Over 100 minutes, that barely register on any temporal scale as you’re in the moment, directors Iain Forsyth and Jane Pollard paint a picture of a quietly transformative artist. This is acknowledged in the film directly, most noticeably by Cave shooting any such idea down during a conversation with Ray Winstone.

As the film opens we see Cave in bed, silently contemplating his alarm clock. It’s an ordinary start to a very interesting film that floats somewhere between documentary and art movie. In fact, it’s true to say that in its artfully crafted study of song writing and the creative process it’s a masterpiece. This of course works because Cave is a very good songwriter and a gifted performer to boot. The sessions with The Bad Seeds are in themselves master classes in how to write and demo a song and are riveting.

Watching the film is, in the context of the experience itself, a truly eye opening journey into the creative processes of an ever ticking mind. Some may say that Cave is a man who chooses his words very carefully and perhaps they’d be right. His lyrics are poetic, personal things filled with emotional resonance but in conversation, as is often the way with performers, he is much more measured and to the point. But even in these instances it’s eyes on the screen material.

One early scene sees Cave sit down with a psycho therapist, (an experience he enjoyed, according to the live interview that followed the screening of the film.) and it’s beautifully moving viewing. As Cave talks of his father, early relationships and past musical experiences you really sense that this is going to be so much more than your average rock n roll film. The truth is, 20000 Days On Earth is a moving piece of cinema that features many moving and highly inspirational moments.

The conversations between Cave and previous collaborators such as Kylie Minogue, Ray Winstone and more illuminate the sense of artistic purpose behind the movie perfectly. Often hilarious and more often touching in a way that’s hard to describe accurately, this is an emotional study of Cave’s music more than any tour document or band profile. The final moments of the film, with the Bad Seeds on stage performing the album highlight of Push The Sky Away, an enormously satisfying version of Jubilee Street, are precious in their formation.

As we see Cave flashback through the ages, playing on the songs final lyrics of change and transformation, you realise that although he denies the fact, he has well and truly transformed in the space of the decades, and in the space of the film. You see not just a vaguely grumpy songwriter, but a person with an enviable life ethic of pushing further until you’re satisfied with your art.

When the credits finally roll over a night time scene of Brighton, Cave’s home for many years, you realise that you have to do something, anything to push for the next step of your creative evolution, if you’re to get anywhere near the power of Cave’s work. Watch this film. You won’t regret it! If you’re a song writer or creator, you will certainly see yourself here. If you’re not, then you’ll see a song writing genius in action in the most beautiful and moving manner.