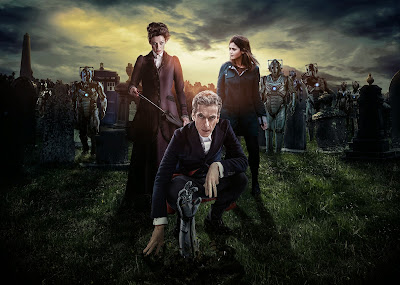 The Story: The dead are rising from their graves as Cybermen to take over the planet. Can The Doctor (Peter Capaldi) and Clara (Jenna Coleman) save the world from Missy’s (Michelle Gomez) deadly army? With UNIT on hand to help, what could possibly go wrong? Well, quite a lot as it happens.

We ended our review of last week’s Dark Water by saying that we need to judge any two-parter as a whole. So how did Death In Heaven do after Dark Water’s gobsmacking action and revelations?

In Death In Heaven writer and Doctor Who showrunner Steven Moffat has given us a beautifully constructed end to Peter Capaldi’s first series. With echoes back to the days when Russell T Davies ran the show, Death In Heaven is a good old-fashioned linear story with no timey-wimey jumping about and very little twisty-turny cleverness. What Moffat delivers is a very pleasing tale with a great villain and a very human tale at the heart of it.

Of course, there has to be some twisty-turny business and this is delivered in a fantastic pre-credits sequence where Clara declares herself to be The Doctor before the titles appear with Coleman’s huge round eyes instead of Capaldi’s attack eyebrows (the first time a companion/assistant’s face and name has appeared before the current Doctor in the titles in the show’s history, fact fans). This is all a great big lie, of course, as Clara is merely buying herself some time (and life) in the face of a deadly Cyberman.

Picking up from last week’s episode, Missy/The Master (I’m just going to call her Missy from now on - we all know who she is) is busy raising an army of Cybermen from the dead of planet Earth. As the locals are busy taking selfies with the invading army, unaware of the danger they face, UNIT handily appear with a kick-ass Kate Stewart (Jemma Redgrave) and UNIT scientist Osgood (the very lovely Ingrid Oliver), who we last saw in The Day Of The Doctor.

As Missy sends exploding Cybermen into the sky to rain down Cyber-pollen on the Earth’s deceased in order to recruit them, The Doctor is made President of Earth to take her on and whisked away with a UNIT task force on board Britain’s answer to Airforce One. Meanwhile back on Earth, Clara is saved from death-by-Cyberman by the recently deceased Danny Pink (Samuel Anderson). But not Danny Pink as she knows him. Mr Pink is heartbreakingly returned as a Cyberman; but one whose emotional inhibitor is not working yet, which means he can still feel. Clara’s lies to cover up her double life have been an ongoing theme this series and here, in a graveyard scene with Cyber-Danny, the truth about her relationship with The Doctor makes Danny ask her to literally switch off his feelings to end his pain. It’s agonising to watch as Clara considers killing the man she loves after her utter desperation to save him in last week’s episode.

While The Doctor deals with Clara, Cyber-Danny and the threat to mankind, Missy busies herself on a killing spree of his chums. Just as we’re imagining the lovely, bright Osgood as a future companion, Missy brutally turns her into a pile of dust. Causing the plane to break up as she escapes, Missy inadvertently kills the crew while Kate Stewart falls to Earth and certain death, Well, almost certain.  After last week’s internet-melting revelation that The Master is now a woman, here we have time to enjoy the unhinged murderousness of Missy the mad-eyed Mary Poppins.  Michelle Gomez is nothing short of perfect in the role and and is a perfect foil for Capaldi’s Doctor Who.

The Master and The Doctor - two sides of the same coin (or two edges of the same sword) - once childhood friends and now eternal enemies who embody the old “can’t live with each other/can’t live without ‘em” ethos; turns out Missy’s motivation this time os not to rule the world, but to play with her old playmate again. She turns her Cyber-army over to The Doctor to prove he’s just like her.

Of course, the Doctor has never wanted to rule and the thought of it now horrifies him and he throws the Cyber-control bracelet to Cyber-Danny, who takes control and saves the day by sacrificing himself and his fellow Cyber-zombies. It’s a crying shame that we’ve seen so little of Danny Pink this series and more so now that we’ll never see him again. Cyber-Danny’s speech as he prepares to finally die (yes, for good) is surely Samuel Anderson’s finest hour.

The Doctor is saved from having to kill Missy by the appearance of his old friend, the Brigadier, resurrected from the dead as a Cyberman, who co-incidentally saved his daughter Kate from her fall from the plane.  But, this being Doctor Who, let’s not imagine for a minute that this will be the last we’ve seen of Missy/The Master.

In a series underpinned by lies, this final episode ends with the biggest lies of all as Clara and The Doctor bid farewell to each other. Thier lies are designed to protect each other and they part each in the very wrong belief that the other will be fine.

However, just as the end credits roll and we ponder this melancholy parting of the ways, The Doctor is disturbed by a cheerful knocking on the door and a voice admonishing him for letting it end like this. Enter Nick Frost as Santa Claus! Blimey. Which sets us up for a very long wait until the Christmas special. A very long wait indeed.

So that’s that then #1: Missy was the woman in the shop who gave Clara the TARDIS phone number in The Bells Of St John. And the person who placed the advert in the paper in Deep Breath.

So that’s that then #2: The question “Am I a good man?” Is finally answered as The Doctor declares “I am not a good man. And I’m not a bad man. I am an idiot with a box and a screwdriver.” Not quite as catchy as Matt Smith’s “I’m a madman with a box”, but it’ll do.

Doctor Who cosplay award: Osgood,who was last seen wearing an enormous fourth Doctor scarf, here she’s seen wearing tenth Doctor Converse and an eleventh Doctor bow-tie after meeting both in The Day Of The Doctor. “Bow ties are cool.”

Ominous Statement of the Week: “How can you win a war against an enemy that can weaponise the dead?”

Song of the Week: Missy’s rendition of Marylin Monroe’s notorious “Happy Birthday, Mr President” to The Doctor. Incidentally, the eleventh Doctor met Marylin at a party in 1952 and married her, although he denied it was a legitimate marriage.

Emotion of the Week: The Doctor as he takes his leave of Clara
Clara “Doctor, travelling with you made me feel really special. Thank you for that. Thank you for making me feel special”
Doctor “Thank you for exactly the same.”

We’ll be back with Doctor Who for the Santa-tastic Christmas Special on, December, erm, 25th!