It’s a fact that PJ Harvey has never released a truly bad album. You could even argue that each of her albums of so distinct they really couldn’t try to be bad if they wanted to. But out of all her release, the album that polarises critics the most is the album the artist has cited as her personal favourite. 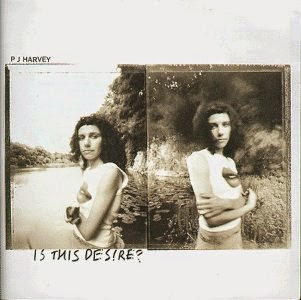 The dark undercurrent that informs Is This Desire is certainly not unusual on a Harvey record, for sure, but with a comparatively stripped down sound for that point of her career, it must certainly have seemed a strange beast indeed compared to the raw Blues inf0rmed To Bring You My Love. But despite its aural distance from the past Is This Desire is one of Harvey’s career best releases.

It had never been too obvious on previous albums, but Harvey’s vocals and gloom inflected lyrics are something that must be listened to be truly enjoyed. With a more studied sound, these qualities shine through even more. Over the course of the album we hear various modern fairy tales based around the characters often mentioned in the song titles. Female names abound as song titles or narrative devices and with a more experimental production, that is often jarring even on later listens, Harvey creates an uncompromisingly dark collection of tales featuring murder, loneliness and other such gothic subtexts.

Of course, PJ Harvey has always been somewhat of a dark soul if her music is anything to go by and there is nothing wrong with that at all. Out of all of her album releases, it’s by far the most satisfying. There is a narrative thread at play that weaves together the aforementioned female characters with a surprisingly intimate mix of industrial soundscapes and digital beats that sound as warming to the ear as the most perfect wine on a dark summers evening.

The theme of the dark experiences of women characters, perhaps semi truthful or not, runs through the songs and is most effective on songs such as the distortion laden perfection of My Beautiful Leah, it’s narrative asking the listener if they have seen the titular Leah with her ‘black hair, brown eyes’ and it’s a refreshingly chorus free song that is as dramatic in two minutes as it needs to me.

Other highlights include The Sky Lit Up, a two minute dark-electro adventure that goes far in its short run time.  Indicative perhaps of the ‘difficult times’ that reportedly influenced the making of the album, it talks if walking in the city at night in ‘a world to be remembered in’ in perhaps one of the darkest moments hidden amongst the soundscapes of the album.

Running to just over forty minutes, Is This Desire has aged very well indeed. Quite often the use of electronic can date a record immensely; even just a few years later, but Is This Desire still holds much joy in the listening. It’s often troubled lyrical narrative is edgy but extremely visual and on songs such as single A Perfect Day Elise you can see that the experiment that Harvey and co-producers Flood and Head made together makes  a perfect, darkly effective sense even over a decade after its birth.

This is perhaps the kind of music that can only be made out of extreme difficulty in life, and although we will probably never know for sure just what made the birth of such a dark record possible, (Nor, indeed, do we need to.), we can be sure that Is This Desire is an album that has limitless listening potential.