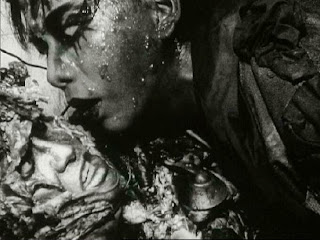 “Let me show you something wonderful – a new world.”

With an ear-punching soundtrack and imagery that doesn’t shy away from being very challenging on occasion it is a movie that defines a movement. Filmed entirely in monochrome and opening with a menacing montage of a man merging himself with a bewildering array of tubes and wiring – the ensuing screams of pain and visceral images of maggots on his flesh make their point very well.

With a narrative that is deliberately disjointed and a tendency to use imagery to move the plot forward rather words and actions it’s an art house masterpiece of Japanese cinema in country that has pushed the boundaries in many films to a degree that many find unnecessary but still more can’t get enough of.

Taguchi Tomorowo’s performance as the unnamed driver of the car that hits the ‘Metal Fetishist’ is always entrancing, nervous yet sure of himself but never unconvincing. The first classic moment of the film is a chase through the tunnels of the Tokyo Metro underground system by an unnamed woman who has been somehow possesses by the ‘Metal Fetishist’ and it’s a pitch perfect performance, chilling yet delightfully mad in its execution.

The monochrome effect is put to its best use here and in the ensuing scenes where the possessed woman (now in the form of very well made up Tsukamoto) catches up with him in his garage the true journey begins for its main character – known only as Man. Surreal dream scenes of sexual fantasy and bizarre imagery ensue and when we see Man awake from said dreams he’s got a very metallic element on his cheek. And it’s from here we see the film’s most famous scenes ensue.

Tsukamoto presents the scenes between Man and Woman (being man’s girlfriend) with a very definite darkness. The very rough sex scenes are played with such malevolence and disregard for pleasure they are almost horrific – and this culminates in the arrival of man’s realisation that his defining feature of manhood, his penis, has become a drill bit that is seriously menacing. It sounds silly – and it seriously should be but is played in such a way that it’s as emotional and horrific as a horror film worth its salt can offer.

If you’ve seen it you’ll know just what we’re talking about – and when the moment of penetration comes it’s not a pretty sight. Sex in horror movies is usually the bait – but perhaps uniquely here it is the horror for one eye opening sequence that defines the social themes of the film. Revenge is one theme, with the metal fetishist using possession to get his revenge on Man but love and the roles of men and women in Japanese society also come into play as well.

As the film continues we see the narrative get somewhat murkier, with the scenes of now very much metallic Man attempting to give his now dead girlfriend some dignity by placing a crown flowers on her head almost touching were it not for the deliberately grating sound FX of metal scrapes and full on sonic assaults delivered from the soundtrack.

From here on it gets more theatrical, with Metal Fetishist donning punk make up and very mad hair to come and pay Man a visit.The films use of monochrome and non CGI special FX are impressive, with the whole thing far too weird to have dated even a bit. The sequence where we see the Metal Fetishists very cyberpunk idea of a new, entirely metal world with everything metallic is spectacularly intricate and as we see the two in the grips of another chase sequence the film makes a kind of very twisted sense.

Tetsuo: The Iron Man is not for everybody and if you’re looking for a nice date movie this isn’t the one you want. But if you’re looking for a film that is challenging, visually striking and never less than interesting then this is very much for you.  Director and star Tsukamoto Shinya is still one of Japan’s most distinctive film makers and with a first movie like this you know why.