Whilst many of today’s Slasher movies owe much to the original indie-horror hit that is Halloween – it’s hard to imagine to which influences the film itself owes. 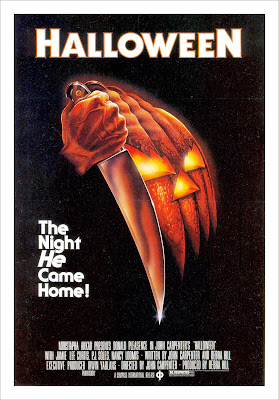 But in many ways Halloween is still an effective watch. From the simple but tension building opening titles with just a well carved pumpkin and a candle and some excellent opening music that sets the tone of fear instantly. It’s a testament to its power that the same theme is used in some form throughout the often erratic sequels – and still gives you that goose bumps-on-the-way jump.

The killer lead narrative also makes it a unique prospect – the creepy Michael Myers making his first appearance one that leaves a definite impression. But he’s not the only highlight in this very watchable scare fest. The leads – Jamie Lee Curtis’ Laurie and Donald Pleaseance’s Doctor Sam Loomis are also well worth the time of night you’ll no doubt be watching this movie at!

When you look at the film without the images of the mostly reductive sequels it really is a perfect example of how to make horror that does very little to scare you but when it does it makes the fear count. It’s not until the last thirty minutes that we really enter the true heart of the film as the final (as you might have thought at the time) confrontation between Laurie, perhaps the most innocent of the girls younger characters we meet, and the seemingly indestructible Michael Myers.

There are moments that pre-sage the arrival of the virtually unlit sets of more recent dramas and an admirably gore free approach to producing a genuine scare. You could almost suggest that without John Carpenter’s evocative and almost barren soundtrack the fear would be absent almost completely. Of course, the image of Michael Myers is still enough of a scare to make you want to run a mile but that’s just the visual aspect – the most effective portrayal in the whole series, to this writer mind at least, of Michael.

The yearly rounds of the film have done nothing to diminish the scare factor of an almost primeval serial killer pursuing Laurie in an almost cat like manner, causing the viewer to look at the dark edges of the screen more than the center just to predict where he’ll come of next. If you haven’t seen this – you should do so soon.

The Slasher genre may have hit the big screen here in a darker, more subtle manner but there’s a film that came four years before that some say is the true beginning – and that is the subject of our next feature – Black Christmas.