My foot is pressed firmly down on the accelerator down the M53, and I glance at the clock – 15 minutes to get into town. It was going to be very close.


I hear a chorus of 'Joe, slow down' from my three friends in the car, and notice the speedometer reading 90. 'Sorry! Sorry-' I say, bringing us to the tunnel entrance – wouldn't want to turn this Daydream into a Nightmare.

Upon arrival, I chaperone my three friends; Alex, Sarah, and Fraser to the TiLT Dance Studios entrance on Duke Street, the Liverpool city vibes already galvanizing my whole body. I had elected to spend the last evening of our weekend band-practice sharing the Liverpool Culture experience with my Southern lot – a shining example of this city's bustling Cultural Scene.

After a bout of hugs and greetings from familiar Music Scene faces, I settle with my pack of culture vultures awaiting the feast of unbridled talent here at Rebel Soul/VoltaSix's Daydream. The venue is just splendid; curtains draped over the beams, a conveniently-placed bar, and a stage-lit projection of Laura Lomax's exquisite visual art pieces. I spy Rebel Soul's Rory Taylor, Mellowtone's Dave McTague, and a host of the Threshold team, no doubt scoping out Lomax's wonderful work for the upcoming festival (27th - 29th March). Mesmerized by Lomax's blend of animated birds, rats, and clocks, it took me a moment to get my notepad ready as the music began... 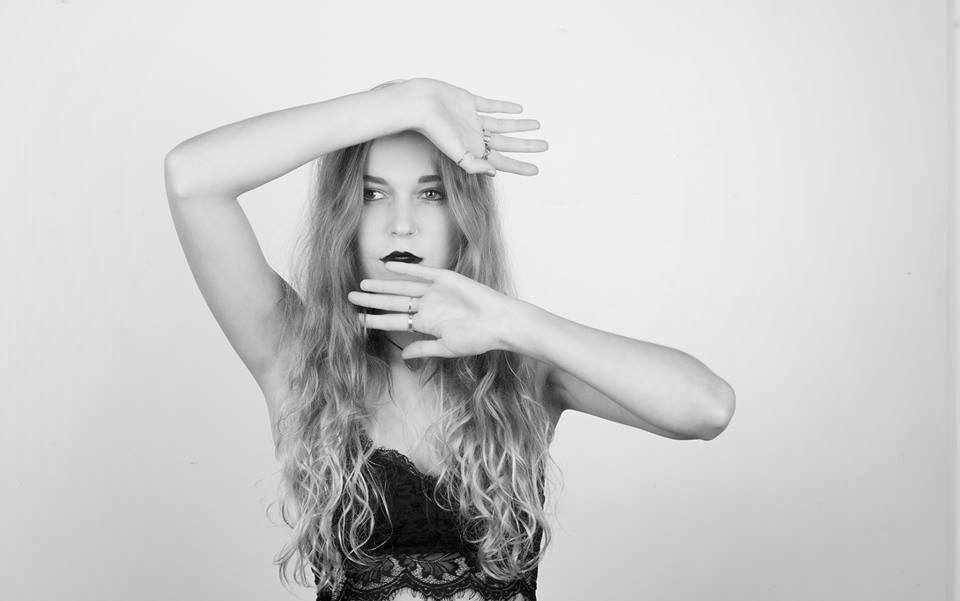 A new face for me, (I'm afraid I didn't catch the names of all her songs), but LUNA took about 8 seconds to fall in love with. A cover of Massive Attack's Teardrop was executed beautifully, her band providing excellent support in a slower rendition of the iconic tune. Her voice is brave, lilting up and around with creativity and strength. It usually takes me a while to settle in to a new artist, but LUNA's Run, Run, Run took me completely by surprise! The progression is so emotive it weakened my knees. I remember having to loop segments of songs in my iTunes just for those special parts that hit the spot, but Run, Run, Run was one continuous pleasure. It's free on her SoundCloud here - so take a moment to feel that falling sensation, and keep one eye open for LUNA.

During the intermission, I was reminded that Liverpool really is a one-off city. I gather that every city/town has their Grassroots Community housing incredible talent, but it took my visiting friends about 10 minutes to remark on the 'amazing vibe' of the place. That's a real achievement, and it's all down to our attitude to the Arts – not just as entertainment, or an alternative to over-populated clubs, but an industry that is continually pushing boundaries, driving healthy competition, forming businesses, and aiding good causes across the UK. After a few conversations with our cultural champions, and a few more minutes staring at Lomax's cascading projections, Si Madison's psytronic-reverb echoes from his guitar. I dragged my group to the audience space like a teething puppy, far too excitable for what was to be one of Simon's most impressive sets to date. 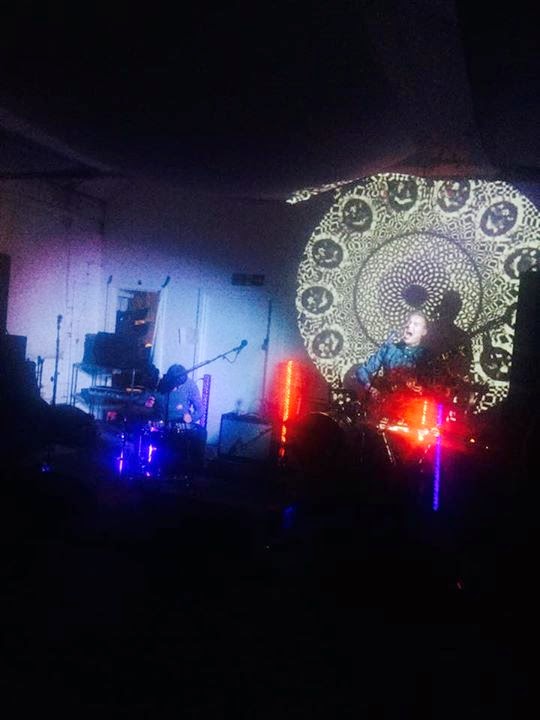 It's Simon and percussionist Chris Cousineau tonight, spinning us off with Global Aerobics, which you can find on the Eigenlicht EP here. Performing in front of a black and white sea, Aerobics takes us away, bodies in the audience swaying in a trance. Cousineau keeps the pulse beating sensibly, the thump of bass drum patting all the muscles in our stomachs.

Hey Ooma, a song dedicated to Si's grandmother, and the goddess of Beauty (n'awh!), sends shivers up my spine with the words 'take me home...' Some initial sound issues end up working really well with Si's uncanny ability to flood the room with atmosphere. Hey Ooma will be available on the Silent Cities album coming very soon...

'Haptophic is 3 or 4 years old now' we're told, a fact I knew already from unashamedly being a SC fanboy since 2013, yet the song feels absolutely timeless. Seeing my friend Sarah sat on the floor brings a smile to my face, Alex and Fraser stood spell-bound next to me. Simon plucks away with Haptophic against a screen-projected segment of film showing a Who-style wormhole -
'Cos they think way too much, I'm alright, I'm just out of time...'

If I were to pick just one element of Silent Cities that stands out tonight in particular, it's Simon's voice. Switching from skin-tingling falsetto into a whispering tenor so fluidly sends a rush through the crowd. We are absorbed into Medina – that cackling reverb echoing through the city. There's a bit of chatter in the seating area, but that's hardly a legitimate complaint. I've found in almost every Silent Cities gig that people don't talk during the set, they whisper...

Except for Petrichord, that's just an injection of life right from the start! Petrichord has drive, it's busy with rhythm and bursting with fitting imagery. Cousineau's rim-shot percussion makes this great tune a masterpiece, a whole new species of atmospheric music. I could dance in the rain to this song all night!

Cave Paintings was a new one for me, which was a wicked shame as it was a little difficult to hear. The marching harmonics were wonderful, but the words were lost in a field of static – not to worry though, final song Beating Heart brought the whole crowd to a roar as collaborating artist Natalie McCool joined Simon and Chris on stage. I swear I want this song to be the last I ever hear on this earth – every hair on the back of my neck rises at the sound of a McCities vocal harmony – gorgeous!

'He's reminiscent of Jeff Buckley, commanding real emotional involvement - and you know what that means when I say that, right? I've never said that about anyone.'
- Alex 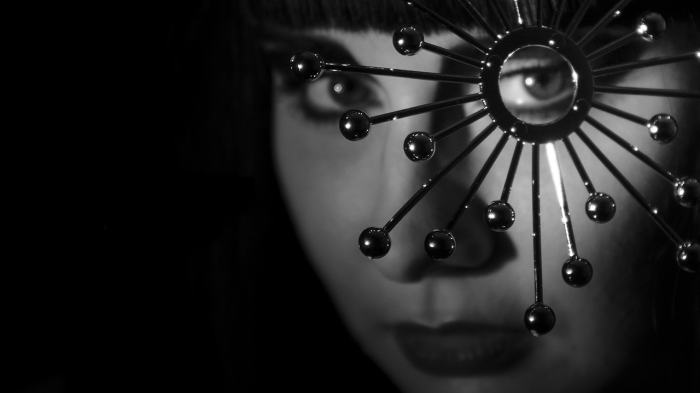 McCool starts off by bringing visionary Laura Lomax on-stage for a congratulatory round of applause. Talent and initiative are rewarded in this community, and there's nothing like seeing your brain-child being born into reality. Truly excellent work Laura!

With McCool and Madison ready to go, newly released single Daydream begins. Striking up; precise, atmospheric, and pitch-perfect, the guitars groan and spark magic – both vocals synced in harmony like black and white. Having listened to the single numerous times since it's release, I was swept away by the accuracy of this live rendition – perfect. Both artists flourish their professionalism, and bring the song to an eerie end. Well, the room just howled didn't it!

As Simon departs the stage, McCool's all-female band take their places, and the 'Addicted to Love' image we see before us is acknowledged jokingly by McCool, brilliant! McCool starts us off with her serene cover of Wondrous Place, the drums break the water's surface, and we're plunged into a new world.

Released last year, single Dig It Out is next, and it's marvelous seeing this live at last! I really have to credit drummer, Laura Williams, and co-vocalist Evelyn Burke straight off the bat, both bringing the McCool experience fully into the fray – excellent work! Brand new tune Pins (available on SoundCloud here) begins with nout but vocals and drums, and as soon as bassist Laura Shea arrives, so do the tingles. We're all aware that we're watching air-tight pros in action here. McCool's song structures never fail to jump through wicked signature changes, unusual melodies, and in the case of Pins, some god-damn hard-hitting punch with co-guitarist Emily Linden to thank for the hit! Seriously, for a track called Pins it felt like rock!

There's a rather large crowd now, and the room is starting to feel a bit more like a gig compared to our congregation beforehand. Daydream's reverence has been put to bed, and McCool is breaking out a host of new tunes with a vengeance! Not a beat has been missed, the band are totally on point, but I was expecting no less.

I was gutted to hear Wind Blows Harder was going to be the last tune – I had my fingers crossed for America, but these are the first-world problems of a fanboy talking. Another beat-driven tune, drummer – has really stood out for me in this performance. Ghostly vocals grow out, washing over the eager crowd before Natalie's powerful cries put the cherry on top of a fantastic night! 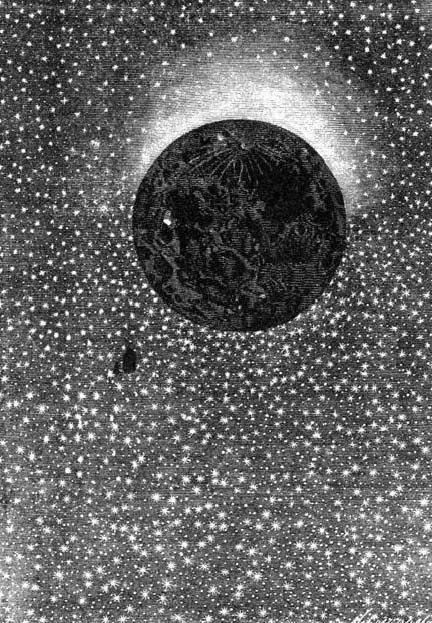 The constraints of being human force me to leave early with my newly converted friends – none of us strangers to the cost of burning the candle at both ends. Still, from what they said all the way back home, it was absolutely what we needed that night. Granted sometimes you just want to go out with your mates and get hammered in an inaudible hole in the ground, cool – we all do! But if you crave something different, a taste of why this city is so well-respected throughout the UK, nay, the envy of it – wake up and join us out here in the daydream.