As part of the relaunch of #SRCZ, I've bagged an exclusive Coffee & Creatives with Luke Moore, Artistic Director of Operation Lightfoot, and #SRCZ founder Sebastian Gahan, who are both looking forward to this year's Threshold Festival at the end of March. Here they discuss the premiere performance of Shoji (Paper Doors) at the festival, Operation Lightfoot and, of course, coffee! 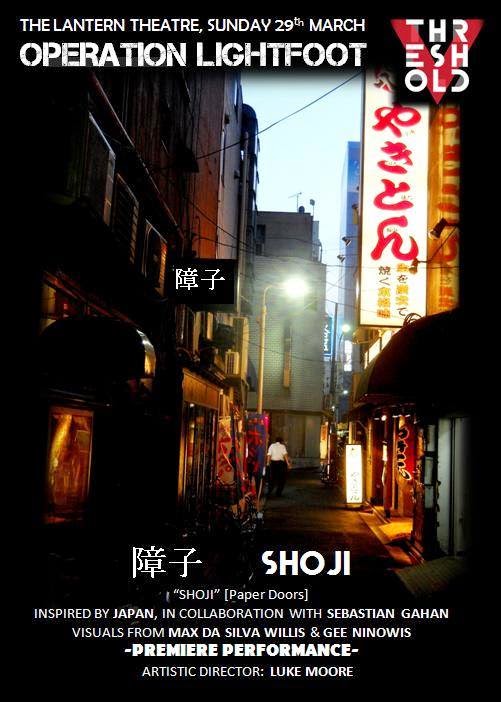 Q: Operation Lightfoot is about collaboration. How does coffee contribute to the collaborative process?
LM: Coffee fuels the late nights, the studio days, the meetings, the planning, the time in between all of that too. It's the caffeinated dark matter propelling the expansion of our collective creative universe.
SG: Agreed, Coffee has been very important a glue in the meetings I've had with Luke about Midgård and latterly Paper Doors.

Q: Talking of the expansion of your collective creative universe....it seems to already be huge (you've got an impressive line up there!) how much bigger do you see your universe expanding?
LM: Well, there are so many people I've already worked with that could fit really well into this project. It's an ongoing series of collaborations; however the focus is on two things, namely our Alignments album which features songs co-written by Vanessa [Murray], Sophia [Ben-Yousef], Jo [Bywater] and so on. The other is our side projects that are self-contained, sometimes commissions such as Midgård, or collaborations such as Shoji that embodies the same spirit but different themes. In some ways, Operation Lightfoot is an umbrella under which these all take place.

Q: So tell us more about the Alignments album....
LM: Alignments sums up, both in name and process, what Operation Lightfoot is all about - bringing people together to make something original, different, new and exciting. In some cases, aligning schedules has been the biggest challenge, but the wait is worth it. The songs too focus on subjects related to the theme of things coming together, or unravelling, as if misaligned. The album will showcase a dozen guest artists and is something that will be a record of the skills and effort of everyone involved.

Q: Sounds challenging. How about aligning some schedules to do the album live? Is that likely to happen?
LM: It's not impossible, and was one of the early aims when I began planning the overall structure and timescale. In some ways, our Threshold slot on Sunday 29th March at the Lantern Theatre is a show and tell of where we are. Honestly, that's much further than even my greatest hopes.

Q: Talking of Threshold....tell us about Paper Doors
SG: Certainly, coming from the perspective of seeing the first show at Threshold 2013 to bringing something to the show in 2015 it's very much of an exciting prospect. Paper Doors is a collaborative piece between Luke and myself and was inspired by Japan.

Q: Tell us more!
SG: It tells a story using Luke's music and a variety of images, some of which are photographs shot around Tokyo that have had various destinations but never quite arrived. On this occasion, they have definitely reached their destination!

LM: Having always been interested in Japanese culture to some degree and having experimented with musical styles akin to that part of the world, it's great to combine Seba's experiences, photos, and narrative with music, plus visuals from our guests VJ Ninowis and Max Da Silva Willis. It's basically themed around a day in the life of someone in and around Tokyo. Musically, the score reflects seeing this through a Western lens, this isn't a pastiche of Japanese music, it's a real fusion of influences.

SG: I think that's a great word for it, fusion. These images are ones that I've been quite protective of until Paper Doors.

Q: It sounds pretty unique even for Threshold! Does film come into it?
LM: It certainly does, with mixed media projections, and some other elements. I have to keep some of it a surprise, but anyone there for this is going to feel transported away from the Baltic Triangle and across to cherry blossom, bullet trains, rice paper doors and rising suns.

Q: How does that feel...having something personal put out there?
SG: Somewhat of a relief, in many ways but also a joy...

Q: Is there (for each of you) a sense of, "It WAS mine, but once it's out, it's what anyone seeing/hearing/experiencing it makes of it"?
LM: Totally. It's always as much interpretation as it is about the musical or visual material. We're doing something immersive and that could be developed into something grander in the future. But the audience bring and take whatever they do and I'm looking forward to hearing what they made of it.

SG: You know when a creative instinct is right and Paper Doors was/is the right time to release them out. Perhaps not a love letter, as the subtexts are somewhat dark, but not based on anything overly personal. More the sensation that to spend any time in Japan is truly a gift but there are shades of grey in the neon haze of the sky line. It's a pleasure though to see what people will make of such a specific project idea.

Q: Ok, let's round off with some coffee questions. What's your best experience with coffee?
SG: People watching over a slow cappuccino in my local independent coffee shop. As as an aid to formulating complex multimedia projects some linked, some not and just enjoying the moment.

LM: That's a tricky one. It's hard to say, but the one that jumps to mind is working with Frankii Phoenix on our Operation Lightfoot track and we were both really finding it a challenge to do a rewrite of the lyrics. We were working at Balance Vocal Studio on Wood St in Liverpool and decided we'd grab a coffee to refocus. One quick trip to Bakchich and a few baklava later and we had it, an almost complete song, and one we debuted at the Culture City Christmas party to an audience that remained almost silent throughout. Definitely thanks to the Arabic coffee!

Q: What link is there for you between coffee and culture?
SG: They can be enjoyed mutually, a gig in a cafe is always a good feeling. Coffee often supplies a starting point for experiencing culture, be it a visit to a gallery or museum or a gig in a venue that serves great coffee. It also facilitates meetings to make culture happen.

LM: I'd say that coffee culture itself has become a phenomenon within itself and means that independent coffee shops like the wonderful Bold St Coffee become hubs for creatives or double as private work spaces. Sometimes it's just too early for a pint!

SG: But it's never too early or late for coffee!

You can see Shoji (Paper Doors) on Sunday 29th March 2015 at Threshold Festival in the wonderful Lantern Theatre. Operation Lightfoot thanks the festival for facilitating the performance and celebrating the music and culture of Liverpool!

Words by Andrea McGuire. Image courtesy of the artists.