Concept releases can go one of two ways according to this listener. That is to say, they can soar into your subconsciousness with an uncommon ease or fall flat on their face under topics that don’t resonate easily. Cheatahs’ Murasaki EP though is an instant winner. Coming hot on the heels of a full length album in 2014 and a previous EP release it’s a surprisingly fresh product that sounds genuinely magic given the highly literate reference. 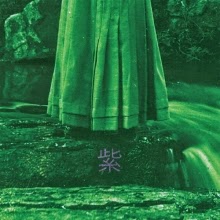 Scholars of Japanese history may have come across the name of Murasaki Shikibu previously but for those who haven’t she is the author of The Tale of Genji, one of the world’s first novels still considered to be a classic, and is thought to have died in the year 1025. In a time when women had very little standing in society and even less access to education the book is itself a remarkable and justifiably significant event. But how does that connect to music released almost ten centuries later?

Over the course of the EP the band, all from various places around the world, explore their own journeys and ideas and in this sense, there is a parallel. Although the 紫(Murasaki) EP is far from the well over 1000 page tome that is The Tale of Genji, the themes of looking around the world are present and correct. In a city like London, where the band is based, it’s impossible not to take in the world and that feeling imbues the music.

Opening track ‘Murasaki’ is an addictive slice of atmospheric rock imbued dream pop in its pure ease of listening. The lyrics, semi sung in Japanese for those with a keen ear, imagine the first meeting of American-Japanese bassist Dean Reid’s parents and the song as a whole, with the electric squeal of its guitar lines, is a definite expansion of the band’s sound.

The music goes in other directions as the EP continues, from the self consciously off kilter to the anthem like choruses that often take the form of little more than a well manipulated guitar line. Wash Out, as the closer, has a positional duty that it more than fulfils with the constant shift in focus from the aforementioned effect soaked guitar lines to the very much there but perfectly mysterious vocals.

An EP like ‘紫(Murasaki)’ is rare in its productive intensity and as such the four tracks contained within work as their own narrative structure in some ways which makes the habit of choosing a highlight a difficult one. This writer is keen on the whole and would recommend the listener to listen with headphones in a typical morning Tube crowd situation just to get a sense of the intensity of much of the record.

‘紫(Murasaki)’ is released on May 4th 2015 via Wichita Recordings.