When Death Grips are at play, shit happens. Usually, said shit is worth wrapping your ears around. So it was that when a mysterious download link appeared from a band called ‘the i.l.y’s’ it caused a lot of pricked up ears. One set of ears that pricked up was our own and we shall reveal our thoughts below… 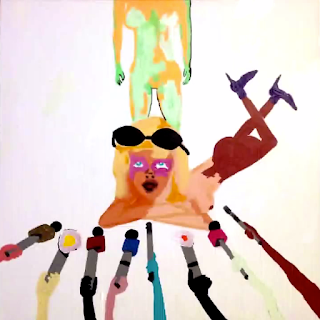 Clocking in at a perfectly punk thirty minute run time, ‘I’ve always been good at true love’ is a curious album. Coming out of nowhere, (as is common for much of Death Grips’ work, whose label this is released on. Indeed, perhaps this IS Death Grips?!) There is almost no expectation at all but the unexpected. Anyone ‘expecting’ a contemplative symphony of musical perfection though was mistaken.

On the contrary, this album is in the same vein of instant, almost punk rooted music that ‘Grips produce but it’s not as burdensome on the brain in it’s BPM as much of their catalogue is. There’s a danceable, almost pop sensibility here that would never work in the world of ‘Grips because they’re so utterly intense to begin with. The beats are still big, the moshing possibilities are definitely there (Listen to ‘Specialized’ and it’s instantly evident) but the noticeable difference is the lack of MC Ride’s instantly recognizable vocals.

But that’s just us assuming this is Death Grips fucking around with us as usual (and that’s the exact term, before questions of journalistic integrity arise!) and giving us what we didn’t know we wanted. Whoever this is, they have made an album that is hardcore yet accessible, intense but never over bearing and most of all it makes you want to move like a kid in a smoky  club and not care a damn.

Just listen to the lower cased but power-charged I.l.y’s and try to forget it might be Death Grips in disguise, because whoever it is clearly rocks harder than most. Fuck yeah? Fuck yeah.