Here at #SRCZ Magazine we’re used to writing reviews. In fact, (with the occasional break), we’ve done a lot of them over the years! But it was lovely to read the following words from the excellent Moss & Jones, whose album we reviewed a few  weeks back,  on their blog about their experience of the evening!

For us, this was one of the best editions yet and will take some beating in future months.  We thank all our guests, the excellent venue that is Wirral Arts Centre and all who came for an excellent evening!
“We both have Wirral connections; Marc is from the Wirral originally, and Ruth has extended family there. However, funnily enough, we'd only played one gig over the water before (at Christmas, when we won the Wirral Carol Competition with A Song for Mary), so we were delighted to be asked to play at the Wirral Arts Centre for Seba Rashii Culture Zine's Creative Watch Area.

The Wirral Arts Centre is an absolutely gorgeous venue; a former Unitarian church, it has a beautiful domed stage area with a baby grand piano and marvellous acoustics. It's a pleasure to play there!

After soundchecks, a cup of tea, and some chit chat, we settled down to listen to the first artist, storyteller Andy Johnson, with a musical ghost story to get us all ready for the night! He was then followed by the first musician, Tiki Black.

Tiki took to the stage with her piano, and played a selection of beautiful, haunting, powerful songs. Many of her songs were about the way we try to hide away, behind masks, from our full potential, and were taken from her album, Out of the Black, which you can stream on Soundcloud and buy on iTunes. Tiki has a wonderful voice with a fantastic range, and her dulcet piano playing the perfect accompaniment. Our favourite was the title track from her album, though hard to make a choice as they were all so profound.

Next up was Tom George who started with some poetry. Tom is a seasoned performer; our favourite was moving poem about silence, during which you could hear a pin drop. (Literally, as he made use of such a prop to demonstrate his point!) Then he played some music, accompanied by flautist George Roberts (who played at our wedding), and included the wonderful Dance with my Shadow in his set. You can download Tom's music from Bandcamp.

After Tom came storyteller Andy Johnson again, with a sweet tale, which he told us was originally from Africa, about love, death and family, accompanied this time by Tom on guitar. The pairing worked wonderfully; Tom's incidental music was ideal for the story, but at no point took away from Andy's primary role as storyteller. Andy's gentle voice drew us into the story, with its beautiful message that no one is really dead while they are still remembered.

Then it was our turn…” Read the rest here! 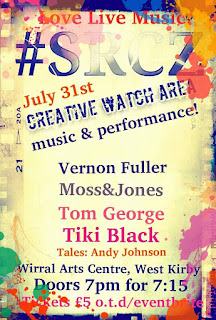