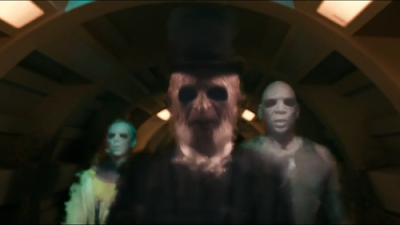 Somewhere out there, in some forum digital or physical there’s someone being verbose about Doctor Who. Positive or negative, that’s only a good thing. Anything that gets human beings communicating and expressing emotions is not a bad thing. (With some exceptions obviously!) In the case of Doctor Who there’s a legion of people out there watching, waiting and anticipating. Few political parties can even do that so to have something as eminently watchable and thought provoking is a joy indeed. With scheduling issues making rumours on the shows status hitting headlines in the background, the show just got on with it does best this week...

That is, corridors, monsters and scares. After the action of the opening Dalek and Missy shenanigans this episode felt a lot quieter and tension based and although it was not quite an instant classic it was far from an In The Forest of the Night as well. Indeed, is it not written that when dark corridors, alien ghosts and Doctor Who gather together in one story a celebration must happen? Probably not, but it’s an established tradition in the series that things do happen when they occur in the same narrative. In the case of Under The Lake, the TARDIS, (apparently not a happy bunny due to the unnatural ghosts), lands in a scientific base underneath a lake in Scotland in the future and almost immediately the action begins.

Greeting some ‘crew’, in fact the aforementioned ghosts, the events leading to the almost expected cliff hanger are set in motion immediately. The person keenest on said adventure though is Clara, suddenly in a fever for action when even the normally keen Doctor initially isn’t. Of course, that doesn’t stay that way for long. Soon enough he’s got the crew running down corridors leading the three brilliantly realised ghosts into a trap to find out what they really want. What happens next surely sets into place some elements that will provide the basis for the concluding part next Saturday. What is in the pod that is so important? Is the Doctor really dead? (Not likely, to be honest!) Why is the TARDIS unhappy? Will we see those flashcards again?!

Best Imagery: The moments where the ghosts appear from nowhere, from up, down, below or sideways are all effective but when we see the Doctor’s ghost floating in the water towards Clara it’s a genuinely creepy moment. It’s an excellent cliff hanger as well!

Food for thought: This episode averaged 3.7million viewers on overnight ratings but will likely accrue a larger number once iPlayer requests and delayed viewings are added in. With series opener The Magician’s Apprentice getting a very good almost 8million views in the final reckoning we‘re not worried too much about the show yet…

Two Parters: Excepting the Christmas special, we’ve had three two parters in a row so far and it’s been a successful experiment!

Music: The Doctor apparently begged 'for the brush of death's merciful hand' after hearing Peter Andre's 'Mysterious Girl' on rotation... we won't put the video here to make you do the same! (He has met at some point Shirley Bassey though it seems...)

Next: Before The Flood