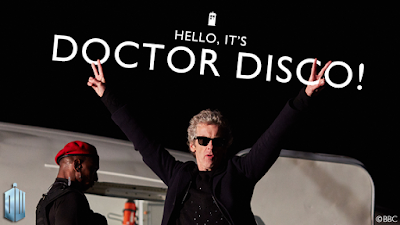 “Any race is capable of good or bad…”

This episode of Doctor Who is certainly well timed from a topical point of view.  In fact, when you hear the words ‘radicalisation’ and ‘peace treaty’ in a show that often skirts on the edge of comedy and fantasy in its plots it will raise an eyebrow or three. (Depending on how many eyes you have, of course!) In the case of this week’s episode The Zygon Invasion, current affairs comes to Doctor Who with a very overt reference to the so-called current global ‘immigration crisis’.

The embodiment of this are the Zygons, last seen in the Day of the Doctor back in 2013 and their seemingly forgotten about plot point is picked up very effectively here. They have been allowed to stay on Earth peacefully in human form and have been doing so until recently, when certain cells of them have begun to call for the right to be seen as they truly are rather than in the shape of a human being.

This first part of the story, (another two parter, folks!), sets up a break neck pace narrative that leaves the viewer desperate for more by the end of the episode and that truly excellent triple header cliff hanger. After the much loved by fandom Osgood returns in a pre-credits sequence that recaps the events of Day of the Doctor and establishes that the two Osgoods are the embodiment of the treaty between the two races, and one of them (we’re never entirely sure which version) is dead. Then the remaining Osgood is kidnapped by the radicalised Zygon’s and UNIT come into play…

If the first few minutes are unrelentingly dark it’s only a good thing. It takes true talent to make a conversation with two little girls, (in fact the Zygon high command), in a playground a serious prospect but when they are soon executed (in Zygon form, rather than human, which might have been a whole other time slot) by their captors things ramp up. This dark, urban drama vision of Doctor Who is certainly doing the show no disservice and plays in stark contrast to the more jocular iterations of previous series.

It’s clearly no coincidence that the Zygon’s ransom video for Osgood and execution video for the aforementioned kidnapped High Command are part of an episode so charged with politics. Indeed, sci-fi has a grand political tradition running through it, from the early idealistic, almost utopian visions of Star Trek’s original episodes to more show’s too numerous to mention right up to today and Doctor Who is perfectly entitled to be part of that. (Even if certainly, there will be many a Daily Mail reader choking over their coffee as they watch!)

The best moments of this episode though are the sheer deceptions that lead to the concluding minutes. When Clara is revealed to be a Zygon copy and sets the horde on all of UNIT’s soldiers it’s not expected at all. Similarly, the lone cop in New Mexico is more of an obvious device but we’re still not sure what version of Kate Stewart is calling into Zygon HQ and just quite how Mollie, in the guise of Clara, will take things forward. Oh, and the air missile launched at the plane of The President of the World? Next week will be interesting…

Clara: It’s amazing how tying one’s hair back makes you look villainous! But, it works…

Music: More guitar from The Doctor, this time playing Amazing Grace. Oh, and Doctor Disco? Doctor Funkenstein? We like! (We couldn't resist the image above from Facebook!)

Did you spot: A picture of the first Doctor on the wall of the UNIT Safe House.

Next: The Zygon Inversion