It was Crazy Clown Time, that’s all we knew. I Know, it might sound stupid but Pinky’s Dream was worth more than these Strange and Unproductive thoughts.   This is how we approached the Lynchian splendour of Crazy Clown Time when we first heard the whisperings of its release on the dark vine. 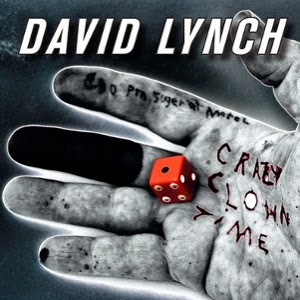 David Lynch has never one to do things any other way than the way he sees fit and it’s that quality shines out on the wonderfully dark and shadowy musings on life that make up Crazy Clown Time. We all know his iconic film work and pitch dark muse is captivating but it was hard to sense what his first official album of music would be like until taking it in as a whole.

As expected, though, it wasn’t merely an album of songs recorded by a close to retirement hobbyist. Far from it, in fact! Just as the average Lynch film is a cocktail of atmosphere, secrets and intrigue portrayed in a manner that is utterly entrancing, Crazy Clown Time is a dark road trip into the psyche of a murderous evening of the soul.

Opening with the Karen O guest vocal featuring ‘Pinky’s Dream’ with its allusions to the nature of the titular Pinky and jagged edged yet welcoming gloom chords, the album sets it’s cards on the table almost instantly. Indeed, the laying of cards is a visual metaphor used in the album artwork as well. There may well be an intricate narrative weaving through the whole of Crazy Clown Time but it certainly doesn’t involve crazy clowns or time. The one thing that is certain is the involvement of Lynch.

On tracks such as the wonderfully weird Strange and Unproductive Thinking it is so Lynchian, to coin that very specific phrase, it metaphorically slashes you in the guts. A seven minute musing on the advantages of dental hygiene for society as a whole set to a pulsing electro tone, it’s a listen you don’t forget.  But apart from this moment and perhaps the soothing tale of the avoidance of negativity that is Good Day Today, the mood is mostly set with guitar and voice.

The title track'screepily pitched vocal works well, narrating a party that sees much beer spilt and undressing, and made for a suitably apt video. The narrative noice on most occasions is moodier and much less visual. Lynch pitches his songs well, and his voice may not be a perfect thing on occasion but that’s not what makes the album so special. Just as a Lynch film must, by cinematic lore, contain black coffee, subversion and weirdness so the music does. There are no direct references to coffee as such but the project is steeped in its dark beauty almost inseparably.  The subversion and weirdness though are in plain sight, referenced in Lynch’s dark tinged lyrics and fixations on people and their darker nature.

Crazy Clown Time, then, is not just an album it’s an experience as a whole. As a debut album of sorts the album hangs together very well and in its dark blues trajectories conjures up a world so twisted and miserable that you can’t help want to step inside.