It’s not often you get an album like this one and that’s a very good thing as it’s a slow burning ear worm of a release from an artist you may have seen in very different performance circumstances. A cursory search of certain video sharing platforms will bring up her utterly fascinating burlesque performances and it is these that inform the crystal like production of the music on this self-titled release. 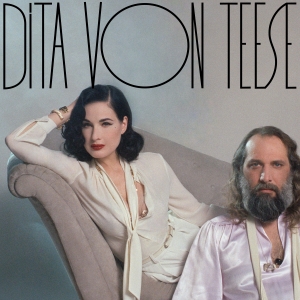 The person the front cover sat artfully by her side is Sebastien Tellier, who initiated the concept of the project with Von Teese and wrote and produced it with his partner Augustine de la Richardiere and if you’ve heard his own work then you’ll know what to expect. But here the sparkle is amped up to Swarovsky levels and in partnership with Von Teese‘s surprisingly competent vocals it's a seriously good record.

It's by no means a commercial album, more a mellow exploration of the workings of the iconic artists inner mind as imagined by Tellier. There is no pretension from either artist to excellence, purely a sense of a project done for the sheer joy of it and that is what shines through most. Sure, it's indulgent but it’s also curiously engaging in it’s decadent, some may say Gallic, vibes.

Throughout the ten tracks of the album there is no sense of ego or vanity project, and one could easily imagine this album working in great complement with her live burlesque performances. Even the French language tracks, the dramatic keys and synth layered ‘Parfum’ and the positively Parisian ‘La vie est un jeu’ are pitched just right and there the true artistry lies. The duo have suggested in interviews that everything they do is glamor and in a world of fakery and pretend this is just the right kind of glamor.