Followers of Amanda Palmer’s Patreon stream were teased with the song title Mr Weinstein Will See You Now in early 2018 and, naturally, with such a title even some of the wonderfully open minded people of the independent artist’s fan base raised an eyebrow. 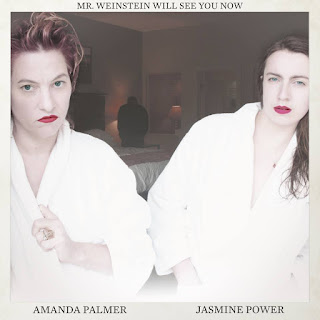 Perhaps this was to be expected but given Amanda Palmer’s form though, it’s fair to say that something beautiful would be forged of the flames that still burn strong following the revelations both personal and socially alluded to in said title, especially as events progressed literally as this piece of writing was being produced. The #MeToo movement is certainly a powerful one and this song is certainly a companion to it’s society cleansing fire.

Within anybody’s catalogue this song would be a bold statement but within a catalogue as robust and emotive as this particular artist it would be unusual and perhaps disappointing not to have such a comment on this very specific collective revolution of the soul. Indeed, it’s worth pointing out that many larger, less open minded record labels would likely refuse to even consider releasing it.

But when you have Patreon, who needs a major record label? This is why the greater movement of collaboration and support that imbues the song is so very important to acknowledge. Whatever your gender or political persuasion (and this arguably goes beyond politics per se), you should have a position on this very important issue, which we don't need to detail too much we're sure. Take a look at the cover art and it certainly says much to convey the important thoughts here.

The elevator door sound effect in the opening seconds sets the scene, almost chillingly so as cascading cinematic piano kicks in alongside a powerful vocal from Palmer. As the song progresses we hear the voice of co-performer Jasmine Power interacting with her in a stream of consciousness like flow and once the curtain opens on the grand and operatic chorus the song is in full flow. It’s an operatic, cinematic and effecting listen, that alludes simultaneously to the terrible events the title references yet gives hope in their wake. The song is certainly one that is explicit in many ways and so it really should be.

Listen only once and you will miss much of the intention of the words, but listen over and the full power of the song, words and orchestration will be even more hard hitting.  Indeed, we’re urged to listen to this track with headphones on to really feel the intimacy of the song and we would urge you to do exactly that as this is a truly lush song that is overwhelming in it’s urge to communicate, much like it’s creator.

The oeuvre of Amanda Palmer, from her Dresden Dolls days to her now decade plus long solo career has always been rooted in the personal and the positively provocative whilst being never less than inspirational in her actions. The germination of this song alone is a sign of her increasingly important collaboration in speaking with the world and getting it to pay attention, and how important it is to listen. Created in collaboration with Jasmine Power in a very fruitful songwriting session and released by the power of collaboration itself through Patreon the song is in many ways rooted in the idea and act of collaboration and support itself.And shouldn't all music and creativity be like that?

It was collaboration between women, men, artists, musicians, patrons and more that made this song possible and it is to be hoped that the song will open conversations everywhere it may go.

Go get the song at Bandcamp now!