On The Scene//Tokyo Sky Tree

If you live in Japan, especially Tokyo, you can’t fail to have noticed a large metallic presence on the skyline. It’s on almost every commercial, in the background in all the best (and worst) television drama’s and has a whole host of merchandise both expected and entirely unexpected connected to it. Yes, it’s the monster construct that is Tokyo Sky Tree. In sheer terms of ambition and scale it’s large metallic finger on the skyline to other nations with similar structures and if anywhere deserves the tallest building it’s undoubtedly Tokyo

On The Scene//Tokyo Sky Tree 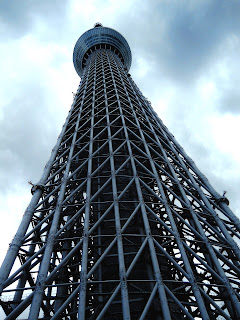 Its position on the skyline has forced the printing of new postcards, renewed greetings cards campaigns, additions to oil paintings and a new appreciation of the initially silly sounding name. Its television campaigns would have you believe it’s a place of mystery, where the cool and chic come together and dig big metal trees over expensive coffee and small biscuits. But despite my cynicism there were certainly many people when we visited and although we elected not to stand in the extreme heat of the day for seventy minutes just to get tickets to go on the viewing deck we did check out the rest of the building.

Granted it’s a very good view of the sprawling metropolis that is Tokyo and likely to be one that gains an iconic status more than it already is but if there is one thing you can be sure of in Tokyo apart from crowds and lots of vending machines it’s the national hobby that brings he people to the legendary crowds. That is, shopping! Yes, the bottom floors of the 634 meter tall building are filled with shops and restaurants of unmatched variety including a dedicated Sky Tree Shop named somewhat cheekily OneTwoTree!  And the much celebrated Ultraman emporium selling goods dedicated to the all action icon. Of course, there are much more sensible shops as well but in the blur of the day that’s all we can recall for now! 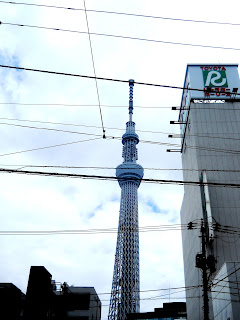 But what about the actual building then? Well, if you like good views of the city and a never ending maze of shops then it’s heaven but as with anything in Tokyo there is an overwhelming sense of busyness that makes the Olympics in London look like a small crowd and if you’re not used to being squashed in a crowd then you’ll be running for the much quieter and somewhat pointless in location terms Omotesando Hills.  But in terms of economic scale and development it shows just what Japan can do even in times when money is supposedly short. With so many people visiting it’s a boost for the area and makes the oft considered tourist district that bit more modern and hip.

As for the iconic status of the construct it seems to be already sealed with the aforementioned merchandise and media coverage taking to it like ducks to the proverbial water. The Asahi TV live broadcast of the recent Sumidagawa Fireworks from the heights of the tower certainly proved that the viewing deck is more than just a photographer’s paradise. It’s a key chain, a pin badge, a beer glass, an omiage box of cookies, a shaped milkshake cup and much more! Indeed, it’s put the once iconic Tokyo Tower into the shade. Who’d have thought that something could do that?

Bets are on the location of the next higher tower in the city!
Words by Sebastian Gahan. Image by Scattershot Photography (c) 2012.