Exclusive Interview//Words with the Unself: CANDIDATE in Conversation

Candidate recently released their second album of mind blowing dissonance, the aptly titled Psychic Dissonance from the Unself. Having listened to the album we decided we had to talk to this band. With a sound they describe as Dream Rock it’s no surprise to find an album drenched in psych inspired sounds and aural landscapes that inspire. Read on to discover just how the band and album evolved... 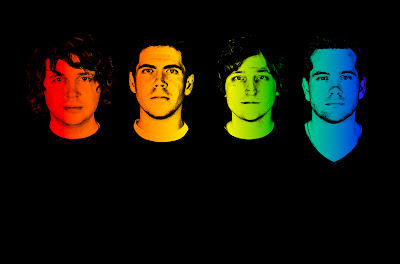 Hi Guys. It’s your second album – how does it feel to have it out there in the world?
CS: Feels good, man.
Jason: Relieved. It feels kind of old at this point.  We have over 30 songs ready for the next series of releases—and of course every one of them is so powerful it will cause spontaneous harmony to erupt across the cosmos.  “Goodbye, entropy. Thanks, Candidate,” said a future person in my imagination.

When I read the title, the rather fantastic Psychic Dissonance from the Unself, I was impressed. What does it mean to you and what inspired its creation?
Jason:  In our old band, we attended SXSW a few years back.  Laurence and I went to a seminar on getting attention from A&R people.-These are the ladies and gentlemen who sign bands to record labels. It was then kind of a big mystery to us. One of the guys on the panel was a big wig at RCA. I liked the cut of his jib, so after the talk, I went up him and told him I would be sending him an e-mail with “Psychic Dissonance from the Unself” as the subject, so he would know it was me. This was my strategy, right?  Not a good one.  But he responded. We’ve chatted from time to time since then, but RCA passed on this album (crazy, I know) although it was termed “very, very decent.”  So, I just made it up on the spot for the sake of identification, I guess.

But what does it mean?  Because it does have a meaning.  It’s not just magnet poetry.  The unself is the negative self or the shadow self- That portion of your being that will insist, against all the evidence, never stop insisting that you simply are not good enough, will not make it, cannot do it. Psychic Dissonance is the effect of this importunate and insidious cause.  So, this album, in a way, is about trying to become a true and whole self.
What are the tracks that the band is particularly proud of?
CS: The sound of April Again is my favorite, but the lyrics of Low Life are probably the most personal that I've written. NYC has also taken on a very personal meaning for me, even though Jason wrote it with different intentions.
Laurence: Brutal and April Again are the best things we've ever done. It's no coincidence that they're the first two tracks.
Jason: Jargon Party. Off of our forthcoming single of the same name.
Chris: Everything For Us.

When listening to the album it seems to move in seasons, from April Again to Winter Thoughts, with April taking on a wintry sound and Winter Thoughts quite summery in comparison. Was this deliberate or coincidental?
Jason:  Wow. I had never thought of that. It must have been a case of psychic dissonance from the unself.
CS: The flow of the album was intentional, although April Again was meant to sound summery and Winter Thoughts wintry. But you can impose whatever season you like on it.
Jason:  Cedric mainly came up with the flow of the album.  As I recall, Justin and I were trying to front load it with the hits.

Are there any interesting stories from the sessions you can share?
CS: I had to work a lot during the sessions, so I had limited time to record. I was sick with a very sore throat and scratchy voice on the last day of recording. I didn't know if I would be able to sing or not, and I still had the majority of the vocals to record. Justin suggested some Bourbon, which worked out nicely I think.
Jason: I love that story. On the last day, I had to go to Kentucky, so I couldn’t be at the session. Imagine my shock when I get a text from Justin saying, “Quick, we need some lyrics for Untimely End.” Cedric pulled it out in the end, though. My second favorite story is this the following conversation I had with my beloved pal, Cedric Sparkman, singer extraordinaire of our mutual rock n roll group, Candidate.   Me:  “We need to be at the studio at 11 on Monday.”  Cedric:  “What?  Why?”  Me:  “Uhhm.  We’re recording an album.”  Cedric:  “What?!?  We’re recording an album?!?  No one told me.”  How does one forget about starting to record their album?  I attribute it to psychic dissonance from the unself.

You’ve used the term Dream Rock to describe the band sound. In parts the album does sound dream like, especially opener April Again. What does Dream Rock entail as a genre for you?
CS: People inevitably ask what kind of music you do. I use to just say rock, as in not classical, country or jazz. But people want to know what you sound like without hearing you. I hate going into all of that post-pre-chillcorewave subgenre stuff or listing influences when you're trying to stamp out your own sound. So Jason came up with Dream Rock.
Jason:  At least for now, we want to make these grand sweeping epic poetic three minute Adult Album Alternative songs. Here are some of my ingredients:  Neu!  A dash of Kraftwerk.  A little bit of New Order.  A love of post-hardcore from the 90’s—Diary by Sunny Day Real Estate.  Check it.  You’re welcome. Of course, boy genius and super producer Justin Craig is of the opinion that “How It Feels To Be Something On” is the best SDRE album, but his opinion is wrong.  The conviction that Clarity by Jimmy Eat World is, in point of fact, a great album.  Did you know that “Goodbye, Sky Harbour” is about “A Prayer for Owen Meany”? True story.
Your website states that the music is based around heartache, heart break, survival and triumph. Despite this the music sounds rather up beat on occasion. Which one has influence Psychic’ predominantly?
CS: That was written around the time of our first LP, but I think survival and triumph apply to the new one, more.
Jason: Survival and triumph are not concepts I would equate with Morrissey level despair, generally.  This was written around the time of the first album, but this album, to the extent you follow the loose narrative, sort of concludes the thought.
From now on we’re only writing songs that fetishize commerce.

Finally, every band has a wish list. What is Candidate’s ultimate wish?
CS: I want a crystal ice palace in the Swiss alps with albino alligators whose eyeballs have been removed and replaced with rubies for aesthetic purposes. Or just being able to make enough money to concentrate on the music 100% would be nice.
Jason:  A masseuse for every band member backstage at Radio City Music Hall. Also, to somehow find the resources to record all five bajillion songs we’ve written.
Laurence: We're gonna get on this "recruit Johnny Marr as a band member for one album" train. Give us a call, Johnny. We're ready to start working.