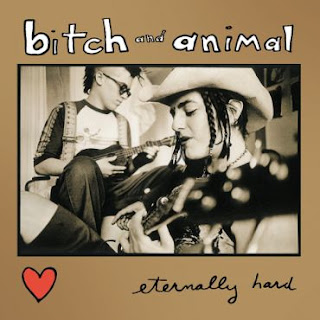 Sometimes you just have to buy something. On every occasion that this happens to me the item, the said “something” is a rather unusual or rare album that just looks and looks at you until you give in and slam your dollars down. This album, took a very short time to enter my hand and end up in my bag. The primary reason I bought it was that Ani di Franco was involved and anything involving the ultimate righteous babe has to be worth listening. Plus, I am an avid supporter of non-conformist and alternative arts, especially music.

Bitch and Animal are a duo from Detroit and NYC who make interesting, inventive, suggestive and rather brilliant Queer Core. Queer core is music that speaks to the gay audience but, to my mind at least, music is for everyone’s ears, so bring it on!

The album starts off with the coarse but brilliant album highlight, Best Cock On The Block, a song about , well, using a variety of different and amusing dildo’s. It takes balls to make a song like this and to their credit it comes off in just the right semi-humorous tone that impresses rather than forces the point too much. The album follows on in pretty much the same irreverent style with brilliant effect. This is an album that you are either going to love or hate. It is possibly the musical equivalent of Vegemite. Which is good.

There is little bravery in the world of music these days, and any artist that tries to be different is welcomed. Tracks such as Sparkly Queen Areola and Ganja are not likely to win any establishment acceptance, but that is not the idea. Bitch’s singing is brilliantly measured and wonderfully off kilter, whilst the lyrics are well written and whilst suggestive don’t evoke anything too sexual as to smother the musical intent. They say that the love between two women is the purest and this definitely shows on Eternally Hard. The music found on this album is pure inspiration, with the production from fellow indie legend Ani D minimalist yet effective. Such talent is rarely found in this world.

This was the duo’s second to last album together and they have since released equally brilliant solo works and whilst this album is not perfection, it is a recommended listen for anyone interested in the alternative side of music. Head over to Righteous Babe and you can buy it online right now and listen to samples!