Threshold Festival always throws up more than a  few must see bands and that's putting it mildly. As part of our coverage of the festival and it's fun we spoke to Operation LIghtfoot (Luke Moore and Richard Geraghty) about their multi-media performance designed especially for this years festival...

How did the project come about?
Luke Moore: At the tail end of last year, I submitted an application to perform at Threshold 2013, knowing there were a few options that could work.  I knew there was a real opportunity to put together something a bit different and I’d admired Rich’s work and intuitive filming and musical style for some time.   As film music had such a big influence on me and Rich had mentioned wanting me to score some strings for his songs, we both agreed that collaborating like this would work really well.

Richard Geraghty: I had met Luke briefly before through my fiancée and through coincidence and some design I ended up sharing a flat with him and our drummer Chris Towner. Luke is obviously hugely talented and has a vast knowledge of music and especially film scoring so it seemed a foregone conclusion that we would work together eventually as we planned to pretty much from the start. He'd mentioned a while ago that he'd managed to get the slot at Threshold and suggested we put something on. We knew it would definitely involve both film and music so we started kicking ideas around and it grew from there.

What can we expect from the performance on the day?
RG: Something which is hopefully cinematic, musically engaging and resonates with the themes of the music we've written and the films we're making. We want to make the audience feel and think and just really enjoy the show.

LM: Emotion, something genuinely thought-provoking for the audience, and a performance that blends the music and film elements in a way that is genuinely exciting for everyone involved.

You have various collaborators for the performance. How did you choose who to work with?

LM: I think we’re so fortunate to have such a wealth of talent on board.  We wanted the best and we’ve got an absolute dream of a line up- it’s the perfect balance of talent, experience, and reliability.  In terms of our actress for the track Champagne Beginnings, I had worked with Muireann McDermott Long when she sang with The Science of the Lamps and she had the right look for the part, so we were so relieved when she agreed to being cast and when the first shoot with her yielded some really amazing scenes.  So, it was a gut feeling that paid off!

RG: Well myself and Luke initially chatted about doing something and from there Luke, who knows a vast amount of very talented people, began putting the team in place. They are consummate professionals and have been a joy to work with. 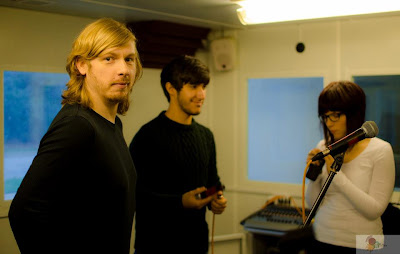 Looking through the images on the project’s Facebook page (Some of which you can see here) they almost tell a story. From the streets of Chester through leafy avenues and urban landscapes and finally into the studio; is there an overriding theme to the visuals and music?

RG: We've discussed a number of themes for this project, as disparate as the loss of love to untimely death to the war on terror and extraordinary rendition so we're covering a quite a few bases! Overall I would say the themes are that of the horrors which face us every day, in the news, on the screen, behind closed doors, in our hearts and minds… All the hits!

LM: There’s a lot of colour, contrast and different shades of light and dark in both our music and film.  I have been in awe of Rich’s ability to capture the emotion of my music in what he’s captured on location and with the stills, and that’s fed into my process when scoring strings for his tracks.  Thematically, we’ve tapped into some pretty dark areas, these are pieces for our time.

Threshold Festival is a prime venue for creative projects such as Operation Lightfoot. What have been your highlights of past festivals so far?

LM: Well, playing to my mum, brother and his girlfriend who had travelled up to see me perform at Chester Rocks last June was pretty ace.  Previous visits to Threshold in the last two years were great too, with so much talent on show, and always nice to bump into familiar faces!

RG: For me playing in festivals has always been in with my band The Glendale Family; we played a few smaller festivals last year and will hopefully be doing the same this year. The highlight so far has been playing Deershed last year and playing Threshold this year, I'm very excited about this! 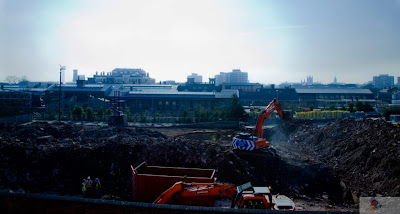 You’ve timed the performance very neatly into the Sunday theme of collaboration. Collaboration is one of the key elements of the festival but what else defines the festival for you?

RG: This is my first time at the festival so I'm just looking forward to soaking it up and checking out loads of different acts.

LM: For me, it’s defined by the amazing variety of entertainment on offer.  Where else can you get a weekend pass for all this, and for just £20?!  I know that the festival’s founders, Kaya & Chris Carney, epitomise the kind of attitude that serves as an inspiration to people in Liverpool’s music and arts scenes. They’re great people with an exciting vision, that’s what any festival should be about.

You have stated that the project was produced especially for performance at Threshold Festival but will it travel elsewhere?
LM: Yes, absolutely.  Even before our debut, the interest that has been shown so far, including the likes of publishing and label contacts, has been really amazing!  The other musicians are already talking about future shows and I would love this to be the flagship project for Rich and I.

RG: Initially I hadn't thought past Threshold but Luke suggested maybe doing more shows and adding material with videos to compliment the new material as well. It sounded good to me so and the buzz we've managed to generate off this project in such a short space of time is very encouraging. So, watch this space!

You can catch Opeation Lightfoot at Threshold on the 10th March at Camp & Furnace at 18:20. For more info see the Threshold website.

Check the band out on Facebook at Operation Lightfoot.