Eyes On The Box// Doctor Who Series 7, Episode 13: Nightmare in Silver

The story: The Doctor, Clara and her young charges Angie and Artie land on Hedgewick’s World of Wonders, a dilapidated theme park and the place where one of the Doctor’s oldest enemies is about to re-appear in force. And with some serious upgrades. 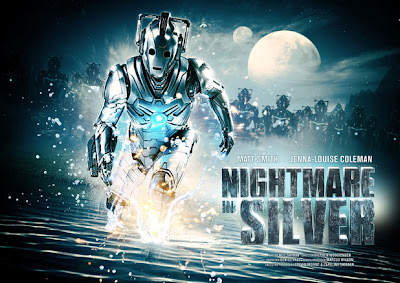 Nightmare in Silver must be the most highly anticipated of the current run. Writer Neil Gaiman’s last episode, The Doctor’s Wife, was an instant classic on its release and much loved among fans of the show. So it was always going to be a huge job to top it. Avid Twitter user Gaiman recently tweeted (twitted?) to a fan that he didn’t even try. And that’s plain to see in this episode because it’s an entirely different beast altogether from The Doctor’s Wife.

Following last week’s revelation that Clara’s wards, Angie and Artie, know that her “boyfriend” is a time traveller, all four tip up at an alien theme park that was once clearly something to see, but is now a ghostly and desolate place populated by the soldiers of a ‘punishment platoon’ led by Tamzin Outhwaite. With echoes of Willy Wonka & The Chocolate Factory, the Doctor flashes a golden ticket and meets the Wonka-esque showman Mr Webley (Being Human’s brilliant Jason Watkins) as he and his companions land on a mock-up of the moon landing.

So far this series, we’ve seen the re-invention of the Ice Warriors in Mark Gatiss’s excellent Cold War and there was a hope among fans that Nightmare in Silver would do the same for the Doctor’s old foe, the Cybermen. Gaiman’s love of the show is evident here as he takes the part man/part machine and imbues them with new and frightening abilities, while bringing along the history of the Cybermen, as well as the odd nod to Star Trek and Cybermen episodes from the show’s own history. These new Cybermen can move at super-fast speeds, as shown so stunningly in a slow motion/fast motion scene of a Cyberman abducting Angie to be upgraded.

There are also the slithering Cybermites, which move like silver fish and are equally as flesh crawling. A welcome addition to the Cyber-family, the Cybermites are far more creepy than the shaggy Cybermats of old. But the new upgraded and constantly upgrading Cybermen are not the real nightmare in silver in this episode. The real nightmare is the Doctor himself, his mind taken over by a Cyberplanner.

The new, nasty Doctor shows us what a truly evil and menacing enemy to everyone and everything he could be if he wasn’t travelling the Universe in a usually benevolent role. He could, in fact, be the scariest thing in the Universe. Matt Smith pulls out all the stops as the Doctor battles the Cyberplanner Doctor in a game of chess for control of his own mind. This is done particularly well and we see the Doctor’s previous ten incarnations, including a flash of his regeneration from the tenth Doctor.

The guest stars this week put in some sterling turns. The children, played by Eve de Leon Allen and Kassius Carey Johnson are clever, precocious and, in the case of Angie, very, very annoying in the way that only a stroppy teenager can be. The always brilliant Jason Watkins does a great job portraying Webley the showman and Cyber-Webley. But the stand out performance in Nightmare in Silver is Warwick Davis in his portrayal of chess master/Emperor of a Thousand Galaxies, Porridge. He brings some serious gravitas as he shows the weight of responsibility he bears, which echoes the life of the Doctor, “the loneliest job in the Universe”. I for one would love to see him in future episodes.

As we see into the mind of the Doctor, we see that he appears to be obsessed with Clara, the “impossible girl”. Nightmare in Silver is the penultimate episode in this series and more questions are raised about Clara and the Doctor’s relationship with her before what is probably going to be a very busy series finale.

Nightmare in Silver was never going to be another Doctor’s Wife, but it was never intended to be. What is it is a good, solid adventure and that’s no bad thing at all.

Check out the prequel to next week’s finale, The Name of the Doctor for some more intriguing insights into the minds of the Doctor and Clara. It’s going to be another long week.

Did you spot: A ventriloquist’s dummy from The God Complex, a Blowfish from Torchwood and a Shansheeth from The Sarah Jane Adventures.