On The Scene//Bulbs Live at the Capstone, Liverpool.

The longest day of the year went by somewhat quickly for this reviewer and it was closed in a pleasantly cool way by a gig headlined by Bulbs that surprised as much as it enlightened... 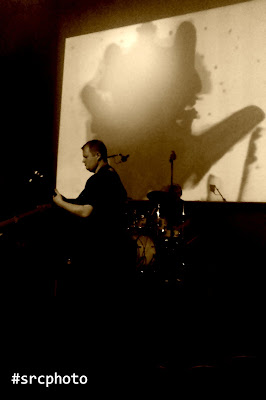 It’s been a while since I’ve been to a gig at the Capstone and my return there made up for that in a big way. The occasion that bought me here was Bulbs album launch for their long awaited album ON. With such a cleverly punning name it’d be easy to expect similar references throughout the set but instead of that we got an amazing support set from Babadub, featuring Bulbs’ own Marty and some truly excellent vocals. There was spirituality positively dripping from the sounds and matched with the cool vibes of the venue it was a excellent beginning. We look forward to hearing more from this duo!

Bulbs came on stage after a teasingly timed interlude and got straight on with the job at hand. That is, set the switch firmly to ON for a straight through performance of the album. Band leader Neil Campbell, minus his usual seat and smart jacket was in rock out mode and with the combined talents of the band we were in for an audiovisual treat.

The spirited run through of the album began at the best place – the beginning. Lament began the set with its filmic sound waves ushering us into the first track proper Frankincensed, its bass heavy arrangement shining in the acoustics of the venue. In its live form it took on an even more filmic quality, the underlying car-chase paranoia vibes coming out even more.

As the evening progressed we were treated to a spectacular, almost non-stop show of dramatic skill as the music told its own unique story of the world around us, from the illusions of life to the undying love that music and visual art can bring. The accompanying visuals were also something to be seen, and quite possibly watch independent of the music as they were fascinating. Taking various elements of the album’s dystopic themes, they showed variously musicians at work, armies marching and the open palmed hand motif that characterises the music’s depth.

Indeed with so much to enjoy from this album launch it’s only a good thing to say that even you’d already heard the album it wasn’t just a straight run through of the work. There were added codas, different voice samples and a dramatic flair that took the music to new levels. If ever a time machine was called for, then a repeat of this excellent gig is surely the excuse…