Colour Of Bone have a certain quality to their music – a sense of neurosis and fraying sanity that cannot fail to unsettle. The synthetic rubs up against the natural, forcing contrast upon the ear – the aggressively untamed versus the strictly regimented, the harsh against the gentle, strain and relaxation playing off one another. This isn't so much 'edgy' as 'on edge'. 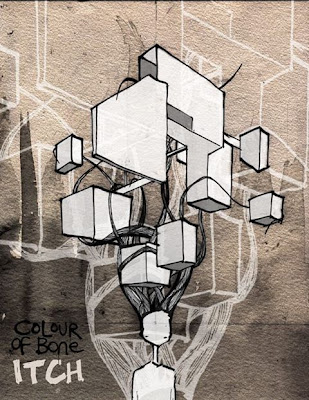 Debut single 'Low Mode' was a slice of neurotically danceable Krautrock with a skirling electro-flute interlude, pivoting on its refrain of “I was made for you”. Second single 'Itch' eschews the dance elements for something more psychedelic; from the opening staccato piano riff to the closing stabs of acoustic guitar, this sounds like the soundtrack to a bad trip. Electronic drums skitter, a distorted synth bass hems and haws at the ear, vocals fuzz and hiss in agitated delirium.

Just when the assault starts to pall, the squall abates and a lone, scratchy string line floats out of the murk, accompanied by a strummed acoustic guitar; the vocals become gentler, swathing themselves in echo. And yet the bad vibes can't be kept at bay for long; they insinuate themselves under the swaying lament, insidiously reclaiming the melody until they drop away for the final, brief coda with the strummed acoustic, and only their sudden absence alerts you to their return. As with 'Low Mode', there's a lyrical refrain which drives the music; here, though, the plea is not for company but for solitude - “leave me, I think I'll be a while”. Each time it appears, the music binds ever tighter around the ear until there seems no escape.

Colour Of Bone: scratch the itch, and enter their dark and doomy world.