Warning! Contains spoilers from the start!

The story this week: While Camille is settling in as cousin Alice, Léna’s scar is growing and seems to be draining her. Julie can’t keep Victor a secret any more and Simon and Adéle grow closer. 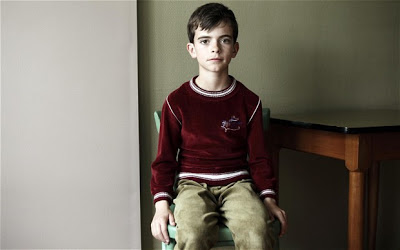 We’re at the halfway point in this series and episode 4 sees the secrets increase and mysteries deepen for all concerned in The Returned.

In a truly horrifying pre-credits sequence we discover that the strange child Victor was once an ordinary boy who was murdered 35 years ago along with his mother and brother. One wonders what has happened to this lonely child in the years in between to make him the odd, silent being he is today.

Mysteries deepen chez Claire as the scar that’s been growing on daughter Léna’s back since dead twin Camille’s return attains body horror proportions. Camille’s return appears to be literally sapping the life from her sister as we also discover that dad Jérome may or may not have attacked Léna a year ago.

Léna’s despair and frustration as the only sane person in the asylum continues unabated as Camille’s “cousin Alice” routine convinces unlikely love interest of both girls, Frédéric, that Léna is the one losing her marbles.

Meanwhile over at Adéle’s CCTV-riddled home, daughter Chloé finds out that mum’s keeping Simon in the attic. In yet another dazzling display of a serious lack-of-alarm at meeting a dead person, Chloé wonders if Simon is an angel. Simon in turn shows a knowledge of Chloé that makes you wonder if his tales of looking down from Heaven are actually true.

We also see Adéle’s CCTV-obsessed fiancé Thomas as less voyeuristic creep and more bumbling, caring, husband-to-be as he cack-handedly tells her that he installed the maze of cameras two years ago in case she tried to off herself again. There are further secrets and mysteries as Thomas reveals that Simon didn’t die in a car crash as Adéle believed, and Chloé’s drawing seems to indicate that Simon killed himself on the eve of his wedding to Adéle. Could this be true? If it is, why has Adéle been lied to for so long?

Possibly the biggest mystery in this episode is that of World’s Weirdest Psychiatrist ™ Pierre. By the end of the episode, he’s got Simon, Madame Costa and Victor holed up at the Helping Hands centre and he’s shown to be the accomplice of Victor’s killer. Who is he and what does he know about the returned dead of the town? And what hope is there for him now that Victor knows who he is?

We end with a distraught and shattered Léna at the mercy of killer Serge in the now notorious underpass. As if this poor girl needs any more merde piled on her already overflowing plate.

Let’s see if we find any answers in next week’s episode, centred on brothers Serge and Toni, as the dead come out into the open, but can’t seem to live a normal life.

Question(s) of the Week 1: Is Léna dying or did she die a year ago? Did dad Jérome kill her? Is she one of the returned?
Question(s) of the Week 2: With more body-morphing this week, what did Thomas really see on the CCTV? Did he hallucinate his own face on Simon’s body or did Simon turn into Thomas mid-bonk? (Yes, I said bonk)
Question(s) of the Week 3: Who or what is Serge? With his “There, there, it’s almost over” approach to dispatching his victims, is he really a merciless killer or is he an angel of mercy helping those who are already dead à la Gene Hunt?

Dam it: What is the link between the returned dead and the levels of the dam continuing to fall? What happened last time this happened? Why is the guy at the dam so reluctant to advise the authorities?
Are you kidding me?: How the hell does Frédéric not recognise Camille?
What the actual…?: Miss Payet committed suicide. By stabbing herself a dozen times? Police procedures/post-mortems must be really different in France.