There’s a saying that goes something like ‘From little acorns grow oak trees’ - and the latest collection of poems in book form from Yoko Ono treads a similarly paved path. Perhaps it’s a deliberate double meaning but the fact that the paper that potentially produced Acorn came originally from an acorn and that is reflected in the books content. 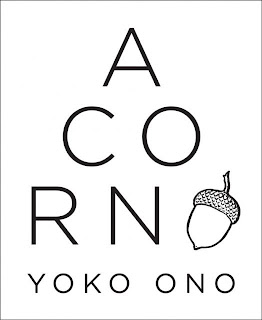 Despite the fact that all the poems in this collection were produced originally for an online project back in the late 90’s this collection feels like something that should be on paper rather than the pixels of a screen. The books pocket size format suits the work perfectly and makes reading through it all the more easier. Each poem is accompanied by one of Ono’s dot drawings and when put together they make a perfect coupling – the often esoteric text holding much to behold when read in the right state of mind.

Ono herself describes them as ‘conceptual instructions’ and you can understand her intentions in this description. Whilst poetry may have semi-rhymes or stanza to give it form (or not – according to some) the texts here are freeform pieces that float into the atmosphere rather than hit you with solid forms. There is a certain amount of interactivity encouraged and this is apparent right from the beginning.

Your Piece asks the reader to create a life bucket list of sorts about yourself and sets you on the journey. Cycles of themed pieces of varying lengths from the brief to the pointedly extended follow and offer great insights into the authors thought patterns. Every word is considered with a measured pace throughout and although it’s tempting to take everything at its spiritual face value there are certain elements of clarity to the work.

The Sky Piece sequence, for example, holds a sky blue clarity to its words and the concluding Quiz segment asks the reader to questions the spiritual weight of the elements of nature – wind, the heart and youth amongst them. This is the kind of book that could answer more questions of the soul than even the bible professes to do. Of course, we know that the work of Ono is not biblical in nature – it’s a spiritual journey that offers no false deities or leaders to the reader but Mother Nature.

You could read each entry as a daily piece of advice, an avant garde guidance poem or a path to follow as loosely or rigidly as you like. Whatever view you take, it’s hard to deny that acorn is an affecting work. There is much to dislike if you are not a follower of the more spiritual paths of life but if you don’t find something that makes you think twice or stop in your tracks you haven’t read this book with the concentration it deserves.

Taken in the greater context of Ono’s artistry this is a valuable addition. Close your eyes and you can almost imagine the music to accompany the words on the page. There is a sense of calm acceptance of the fact that not everything may be perfect but with a little attention to your surroundings or appreciation of something you take for granted you can make the world a better place. And a world without Yoko Ono would be a boring one indeed – as an inspiration for a generation of musicians and performers she has more than proved her worth.

Ask Gaga – this woman is the key to a thousand revolutions of the mind and may she be thanked for it!